Varshavsky to Manage the New PFAS-Tox Database at Northeastern 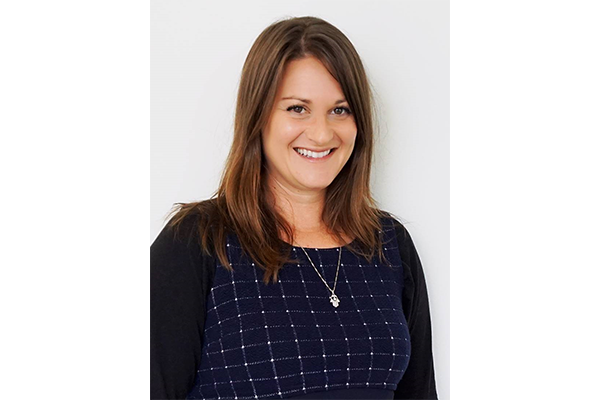 Northeastern University is the home of the newly launched PFAS-Tox Database, a collection of over 1000 different studies examining the effects of PFAS on health outcomes, dating up to January 25, 2021. The database will allow users to filter based on specific chemicals studied and whether the research focuses on humans, animals, or in-vitro. Assistant Professor Julia Varshavsky, who is jointly appointed with the Department of Civil and Environmental Engineering and Department of Health Sciences, will lead the maintenance and growth of the database, which will join the PFAS Progress Lab and other similar efforts under the university’s Social Science Environmental Health Research Institute (SSEHRI). Since its recent inception, the database has already been accessed over 26,000 times and will serve as a valuable resource for industry, academia, government, and activists looking to understand the linkage between PFAS and health outcomes.

PFAS, or Per- and Polyfluoroalkyl Substances, are a class of over 9,000 chemicals used in a wide range of industrial and consumer products because of their stain and water-resistant properties. They are frequently referred to as “forever chemicals” due to their stability and the extreme length of time needed to break down in the environment. PFAS are used to create non-stick cookware, waterproof clothing, dental floss, food wrapping paper, and a near endless list of common consumer products. A common component of firefighting foam, PFAS are abundantly found near airports and military sites and are sometimes the byproduct of unrelated manufacturing processes. Their ubiquity in society, combined with alarming research into their effects within organisms, have brought them under greater and greater scrutiny in the field of public and environmental health.

“There’s a lot of evidence to suggest that PFAS are bad for us–they can disrupt hormone processes. They’ve been linked to a variety of negative health outcomes,” says Varshavsky. The chemicals are suspected of having many negative effects related to weight and growth, the immune system, nervous system, endocrine system, metabolic processes, cancer, and a concerning range of other bodily processes. “But there is still a lot we don’t know, and data gaps when it comes to PFAS effects on health,” Varshavsky says, highlighting the need for resources like the PFAS-Tox Database. With an estimated 57,000 suspected contamination sites in the US alone, a complete picture is critical. The PFAS-Tox Database aims to make the picture clearer by providing a systemic evidence map of the available studies on PFAS and health outcomes. 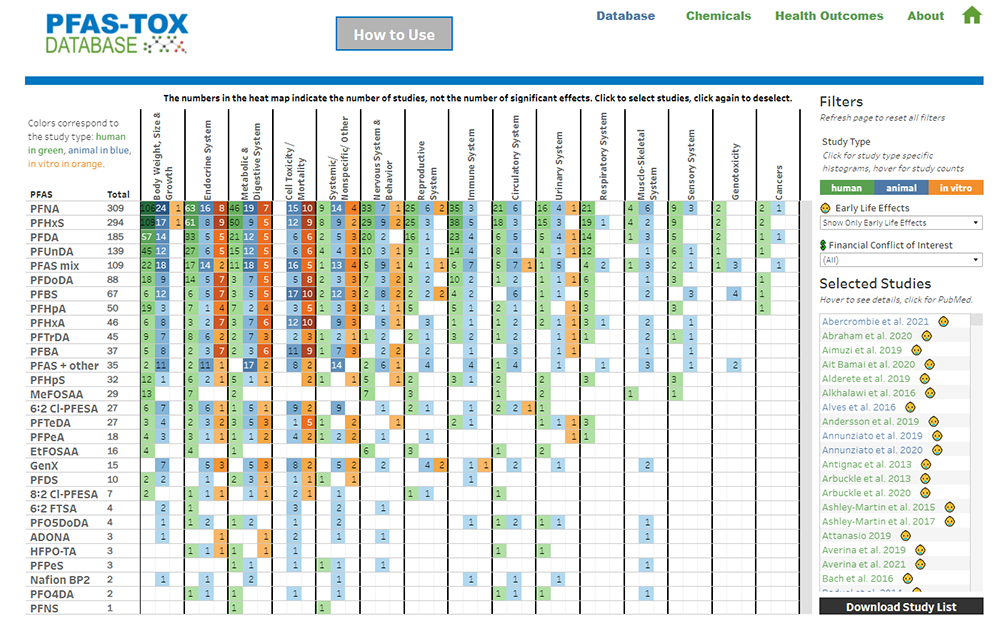 A visual of the PFAS-Tox Database interface

With over 9,000 known chemicals in the PFAS class, the issue is a growing headache for public health researchers and officials, and one that emphasizes the importance of collaboration between public policy and environmental health. “Some of the legacy PFAS, such as perfluorooctanoic acid (PFOA) and perfluorooctane sulfonic acid (PFOS), were used heavily in products such as non-stick cookware and fabric protectors for many years. They’ve gotten the most attention and been more well studied due to their toxicity and because the vast majority of people have measurable levels of PFOA and PFOS in their bodies. As a result, they have been voluntarily phased out of certain products by industry due to pushback,” Varshavsky says. Many manufacturers have simply substituted other PFAS in their place, claiming they are less harmful. “There is a lot we don’t know about the toxicology of emerging and replacement PFAS, such as perfluorobutanoic acid (PFBA), perfluorobutanesulfonic acid (PFBS), and perfluorohexanoic acid (PFHxA), but early indication and studies show they are also problematic.” The EPA is taking a hard look at PFAS, Varshavsky says, but the process is controlled by a law, TSCA (the Toxic Substances Control Act), which regulates the ways in which chemicals can be used but is widely regarded to be flawed. “The overarching issue in the United States is that we have a broken chemicals policy in which industry does not have to demonstrate the safety of chemicals before they are released into commerce. This is a major problem that puts the burden of proof on the EPA to demonstrate exposure and risk, which has serious implications for how we protect public health.”

In Europe, for example, the burden of proof is on the industry to demonstrate the safety of a chemical before it is released on the market. “These chemicals are under scrutiny at the EPA right now, but those processes for reviewing the chemicals at the EPA take a really long time,” cautions Varshavsky, but she also points to ways in which consumers are impacting the issue. “There have been lots of successful consumer campaigns to pressure industry to remove PFAS from their products, including a recent campaign to push REI to stop selling products with PFAS in them.” Due to the industry’s stake in using PFAS, the database also identifies for users if a study has a conflict of interest due to industry funding. The PFAS-Tox Database will provide consumer advocates and government officials with a clearer picture of the PFAS-health nexus as the country grapples with this emerging environmental concern.