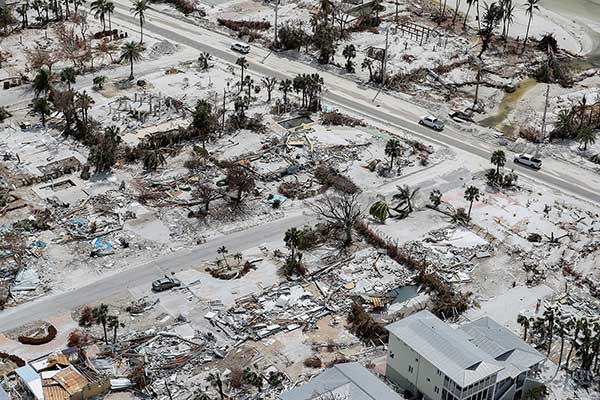 For those areas devastated by Hurricane Ian, Northeastern experts encourage residents to build in natural buffers to protect against flooding when rebuilding.

With storms threatening to intensify, should Floridians stay or should they go?

With hundreds of Floridians remaining in shelters weeks after Hurricane Ian devastated swathes of the Sunshine state, the question many residents face is whether to rebuild—or retreat.

Scientists say Floridians will find it increasingly difficult to keep their feet dry as the effects of climate change cause sea levels to rise and tropical cyclones to become wetter.

A soggier Florida, combined with a growing population and the state’s famed low-lying geography, means there is nowhere for water deposited by storm surges and rainfall to go, says Stephen E. Flynn, director of Northeastern University’s Global Resilience Institute.

The lower one-third of Florida—including the Fort Myers area hit hard by Ian—lies at just about sea level, he says.

“There’s no high ground to go to,” Flynn says. “There’s no place that water can go.”

The built-up environment and loss of marshland means that when the water hits hard surfaces like roads it starts flowing like a river, he says.

The phenomenon was evident 150 miles inland in Winter Springs and Orlando during Hurricane Ian, when storm water and sewage systems became overwhelmed and contributed to catastrophic flooding, according to the Washington Post.

The hurricane’s deadliest effects occurred along the coast. USA Today says the storm surge reached 15 feet in Fort Myers Beach. More than 100 people living along the coast died, and hundreds of buildings were heavily damaged or destroyed.

For every foot of sea level rise, add an extra foot to the storm surge projection, he says.

Considering that warmer atmospheres are associated with more intense rainfalls from tropical cyclones, flooding is no surprise, especially since there is growing evidence climate change is causing hurricanes to stall once they hit land, Munoz says.

Whether water is coming from the sea or sky, “both of those things get worse in a world that’s warmer,” he says.

Multiple media outlets, including Fortune, quote Lawrence Berkeley National Lab climate scientist Michael Wehner as saying that climate change meant Hurricane Ian “was 10% wetter than the storm might have been.”

But Floridians can take steps to secure their paradise, at least part of it, scientists say.

Auroop Ganguly, a civil engineering professor and director of Northeastern’s Sustainability and Data Sciences Laboratory, says he sees a combined approach of rebuilding and strategic retreat as the key to Florida’s future.

Florida’s natural ability to absorb water like a sponge has been greatly reduced by building and the loss of habitat, Ganguly says.

But he says people can bring back green infrastructure by planting mangroves and oyster beds and even installing herbaceous mats to absorb wave energy, such as those proposed by Northeastern professor Julia Hopkins and the Emerald Tutu project in Boston.

Florida building codes already have a good track record of standing up to hurricanes, he says, adding that even more emphasis should be placed on performance-based design or engineering.

Nonetheless, Floridians should remain open to the concept of “strategic retreat,” Ganguly says.

That could mean creating natural spaces and green buffer zones to protect areas from which people do not wish to retreat, Ganguly says.

“I would hate to say the future of Florida is predetermined and we have no say.”

Inaction means by the end of the century it’s likely that “Florida will look a lot different than what we see today,” he says.