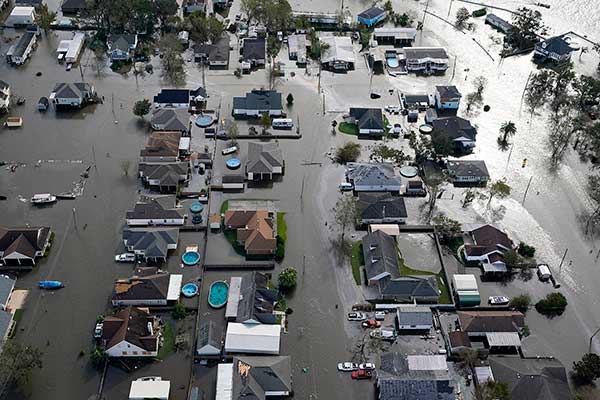 CEE/MES Qin Jim Chen is working with the Nearshore Extreme Events Reconnaissance Association to track hurricane storm data for use in building better levees and infrastructure to minimize flooding damage. The wind, wave, and surging tide measurements will be used to bolster levees, update urban planning and, it is hoped, save lives, says Chen, professor of civil and environmental engineering at Northeastern. The information also can be used to help avoid the rampant flooding and property damage that left thousands in Louisiana without power.

Chen, as part of a federally funded project called Nearshore Extreme Events Reconnaissance Association, worked with a team of researchers from Louisiana State University at Baton Rouge and the University of Florida. The team navigated tricky terrain to physically install the gauges only hours before the storm made landfall. News@Northeastern talked to Chen about the sometimes dangerous process of collecting hurricane information, and how the data can aid coastal cities and towns facing a growing number of destructive hurricanes.

Chen’s comments were edited for brevity and clarity.

Q1. How did you manage to install these storm surge and wind measurements so close to the eye of Hurricane Ida?

Well, I was here in Boston helping to coordinate the deployment of wave and surge sensors and keep an eye on the path of the storm. We started preparing for this hurricane on Thursday. We had already shipped the wave gauges used to measure waves and the storm surge to Louisiana State University at Baton Rouge. The team there assembled and configured the instruments on Friday and they planned to deploy them Saturday, but the hurricane changed course. We had to change our plans late Saturday night and decide exactly where to install them. The challenge is that while the flooding is coming and the evacuations are going on it’s very difficult to go into an area at the last minute and deploy these instruments.

Through collaboration we were able to get the instruments to the coast near the town of Golden Meadow, Louisiana, where the storm was strongest. The field team set up the wind tower at the airport there and helped us deploy the wave gauges by early Sunday morning.

Q2. Why is it important to collect this information?

Levees are often designed using model results of hypothetical hurricanes. We want to see whether the existing theories we’ve used to build these levees are accurate. Using this new data, we can check our assumptions and hypotheses to improve these designs and better protect people and property.

Q3. How is the information used to protect cities and towns that are vulnerable to hurricanes?

The U.S. Army Corps of Engineers needs more information to design better levees, or at least know the weaknesses and strengths of the levees they designed. That’s where we’re filling the gaps. The field data provides a better scientific understanding of the processes, and also there are societal aspects to improve these designs in order to save lives and properties.

Q4. Why is the information collected from Hurricane Ida this weekend especially important?

There’s a lack of data from the field, especially data from the eye of a hurricane. It’s very, very rare. We expect that the data we collected from Ida will give us incredibly important information about wave height, water level and wind strength at the eye of a Category 4 hurricane.

It’s probably one of the few times when we have wind, wave, and storm surge measurements all from the eye of a Category 4 hurricane.

Q5. Can you explain more about the process of working with universities and organizations across multiple states to collect data from these extreme weather storms?

Collecting perishable data of extreme events requires multi-institutional collaboration. When there is a large storm we gather information on the condition of the coastline and built environment before the storm hits. We deploy wave and surge sensors during the storm, and then we retrieve the instruments and analyze and publish the data. We also collect data about the extent of the storm damage on the surrounding infrastructure. It’s often a challenge, but the work is rewarding because we’re able to contribute to science and the community.