Tracking How Black Carbon is Getting in the Oceans 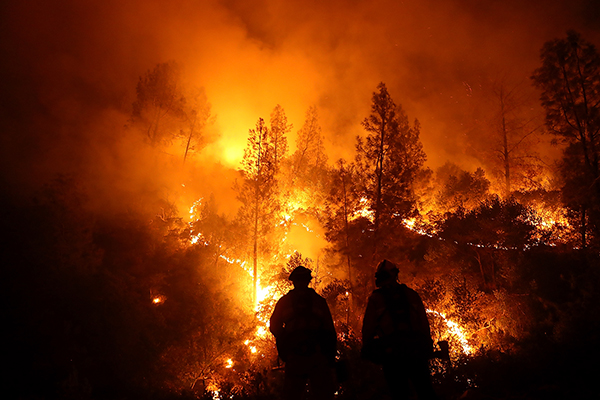 MES/COS/CEE Professor Aron Stubbins is researching how black carbon is making its way to the depths of the oceans.

Is wildfire soot leaving a mark on the world’s oceans?

When clouds of smoke and ash billow out over the ocean, stretching away from the wildfires that are their source, they might not just affect the air quality. Rather, the wildfire soot could leave a chemical mark on the waters below.

As fires burn forests, the carbon that is stored in trees’ woody bodies is largely released into the atmosphere as carbon dioxide. But that’s not the only form a tree’s carbon can take when it is burned. A tree also leaves behind its charred remains, which contain a form of the element aptly named “black carbon.” Black carbon is the product of combustion, explains Stubbins. It can be produced by the burning of organic materials (such as trees) or fossil fuels. Another word for black carbon is soot.

“Some studies suggest that a significant amount of carbon that we lose in deforestation is caused by wildfires, some of that is locked away for longer time periods as black carbon,” Stubbins says.

Much of the soot produced by wildfires winds up on the forest floor to be stored in the soil. But, as anyone with a fireplace knows, tiny soot particles tend to drift.

Indeed, in previous studies, Stubbins and his colleagues found that black carbon from wildfires finds its way into rivers. And those rivers carry materials to the sea, including black carbon.

“So we always thought that the black carbon in the oceans came from the land because there’s no fire in the ocean,” Stubbins says.

But that straightforward picture was about to get a lot more complex.

The scientists wondered if it was possible that some of the ocean’s black carbon might be coming directly from soot carried out over the water in plumes of smoke. And in December 2017, they got a chance to test out this alternate route.

That’s when the Thomas Fire began. That wildfire burned its way into history as the largest in modern California history at the time (it currently ranks as the seventh). The Thomas Fire burned for over a month, and Santa Ana winds lofted thick plumes of smoke and ash over the Santa Barbara Channel.

Stubbins and Wagner had colleagues who were set to go out on an oceanographic research cruise where that plume of smoke was headed. They were supposed to study something unrelated, but the Northeastern researchers asked them to see what was happening underneath that plume and look to see if it was directly depositing any black carbon into the ocean.

Using that information, the researchers calculated how much dissolved black carbon should show up in the waters beneath the smoke plume and what the isotopic signature of that material should be. And that’s when they ran into a problem.

Although the scientists identified an elevated concentration of dissolved black carbon in the surface water, it wasn’t enough to shift the isotopic signature to match the model they had calculated.

“It leaves a conundrum, still,” Stubbins says. “How much of the black carbon is transported directly during these big events versus consistently via rivers and deposition of fossil fuel [products]?”

Stubbins has some ideas of what might have happened. The research cruise arrived at the sampling site once the fire had begun to emit less smoke over the ocean, so perhaps they missed the peak moment. And maybe, he says, some of the sooty particles sank to the bottom of the ocean and were buried in the sediments.

Regardless, the scientists don’t think that rivers were responsible for the elevated concentrations of dissolved black carbon below the smoke plume. As they outline in a paper published recently in the Journal of Geophysical Research: Biogeosciences, if dissolved black carbon in seawater was coming from the rivers, they would expect that the same waters that contained that transported soot would also be less salty. Indeed, they were not. So that seems to support the hypothesis, they posit, that ash from the fire could be the more direct source of black carbon beneath the smoke plume.

Another research study by Stubbins found that the isotopic signature of the dissolved black carbon found in rivers doesn’t match that of the black carbon in the ocean under more normal conditions.

Regardless, Stubbins says, this is the first time that the direct input of black carbon into the ocean from wildfire smoke has been studied. “The actual amount that ended up in the ocean during that specific event was hard to quantify,” he says. But Stubbins says it is important to figure out how this might affect the broader carbon cycle.

“Wildfires are becoming more prominent,” he says. “Is this way of delivering black carbon to the oceans likely to increase into the future? Those things feed back into the black carbon cycle in ways that we don’t quite understand yet, and we need to start piecing those budgets for contemporary black carbon cycles together.”