Supporting Her Homeland of Lebanon 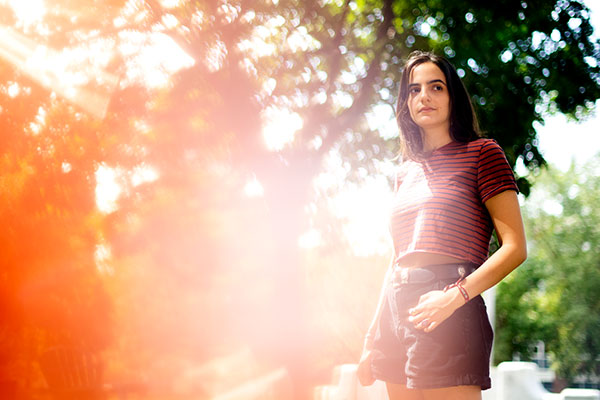 Engineering and Public Policy student Karen Fayad, E’19, ME’21, has been working with the Jobs for Lebanon charity to raise money to provide food and reconstruction support to help her home country of Lebanon.

She was already trying to help Lebanon. Then there was an explosion in Beirut.

Main Photo: Karen Fayad, a current graduate student who is trying to raise money to help Lebanon after the explosion. Photo by Matthew Modoono/Northeastern University

Karen Fayad had the next eight hours mapped out from her Boston apartment—studying for her Northeastern master’s in engineering and public policy, working her part-time research job, and helping a charity—when a friend texted her at 11:15 a.m. on August 4 about the catastrophe in Beirut. Hey there just has been a huge explosion in Lebanon read the message, followed by a screenshot in Arabic. Fayad phoned her mother, who lives 15 minutes by car from the 2,750 tons of volatile ammonium nitrate that had been stored for six years, inexplicably, at the Port of Beirut.

“How did you know?” her mother said. The explosion was 10 minutes old. Her apartment in the mountain village of Roumieh was littered with broken glass and other destruction.

Though at least 11 of Fayad’s friends in Beirut have been left homeless, she is grateful that no relatives or friends are among the 171 people known to have died in the explosion, or the additional thousands who are missing. Friends have told her that the initial blast enabled people to seek cover before the larger second detonation, which came after 6 p.m. local time, when thousands of daytime workers had already left their jobs at the port.

The explosion, which left a crater almost 50 yards deep and created tremors 150 miles away on the island of Cyprus, has fragmented the misery that Lebanon was already enduring.

“There has been a famine, a huge economic crisis, and now the worst humanitarian disaster that has made over 300,000 people homeless,” says Fayad, a 2019 Northeastern graduate in industrial engineering. “This is why we are trying to raise money.”

Fayad is working with Jobs for Lebanon, a U.S.-based charity launched earlier this year in response to the economic plight in her home country. More than $300,000 has been raised already, but much more will be needed to achieve the dual goals of providing food and enabling the reconstruction of Lebanon’s capital on the Mediterranean coast. Lebanon was in crisis long before the explosion. Its currency, the lira, was plummeting in value, its central bank was accused of running a Ponzi scheme, and the economy was shutting down amid high unemployment—a watershed that led to the political ascension of Hassan Diab, a longtime electrical engineering professor at the American University of Beirut. He became prime minister in January, weeks before Lebanon was further ravaged by the COVID-19 pandemic.

Diab and his cabinet resigned after the destruction of the port, although they will stay on in a caretaker role until a new government can be elected.

Three-fourths of the nation is below the poverty line, according to the World Bank, and Lebanon could exhaust its supplies of grain and other food staples within three weeks.

Supporters of Fayad’s efforts include Joseph E. Aoun, president of Northeastern, who was born and raised in Lebanon. During the nation’s 16-year civil war that ended in 1990, Aoun studied in France and settled in the U.S.—connecting him with Fayad and the global diaspora of 15 million Lebanese emigrants.

“The first thing I did was to reach out to President Aoun,” Fayad says. “Northeastern has such a big network, and he has been getting me in touch with many people. I am using all of my contacts.”

Fayad emphasizes that the charity is not dependent on the Lebanese government; Jobs for Lebanon has joined with Unicef and other non-governmental organizations to form the Beirut Relief Coalition, in order to respond to the crisis on a variety of fronts.

Jobs for Lebanon has helped to procure and fill a Fed-Ex plane with $4 million of medical supplies that will be delivered to hospitals and trusted organizations in Beirut, one of the world’s oldest cities.

The charity will be delivering more than 10,000 food boxes that each hold a one-month supply for a family of four. It is also creating a network of engineers, contractors, and builders to help restore the city.

Fayad draws strength from the words of Lebanese-American writer Kahlil Gibran: Out of suffering have emerged the strongest souls; the most massive characters are seared with scars.

The converging emergencies will unite the Lebanese people, Fayad believes. Her dream is to return home as an engineer to help rebuild her country.

“Historically, it’s such a resilient place,” Fayad says. “The port is a beautiful area. I remember going there as recently as January and meeting my friends, and we had no idea that there were all of these chemicals being stored there that could kill us.”

To contribute to the support efforts in Lebanon, please visit: https://www.jobsforlebanon.com/donate/.