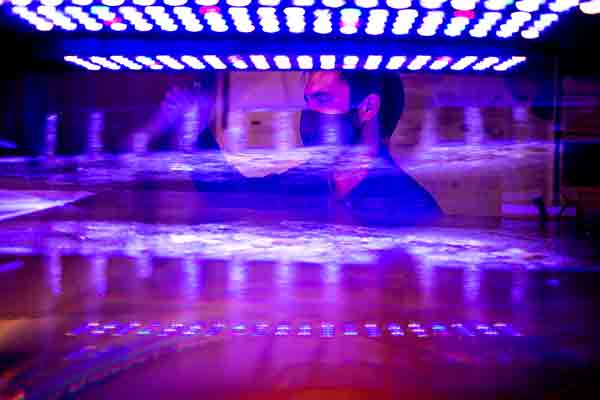 MES/CEE Assistant Professor Samuel Muñoz is using sediment cores collected from the bottom of water sources that have compacted over thousands of years to help predict the future of our climate.

To predict our future climate, they’re digging into the mud of the past

Main photo: Using molecules left in the mud of an Illinois lakebed by long-dead bacteria, Samuel Muñoz, an assistant professor of marine and environmental sciences, and his colleagues have reconstructed ancient climate conditions in the Midwestern United States. Photo by Matthew Modoono/Northeastern University

In long cylinders kept behind a large metal door in an underground bunker, Samuel Muñoz stores the keys to the past.

The tubes contain layers of sediment compacted over several thousand years on the bottom of lakes, bays, and other calm bodies of water. Some of them have traveled with Muñoz, an assistant professor of marine and environmental sciences at Northeastern, for the better part of a decade.

Using molecules left in the mud of an Illinois lakebed by long-dead bacteria, Muñoz and his colleagues have reconstructed ancient climate conditions in the Midwestern United States. Their results, published earlier this year, could help us understand what’s in store for the region’s future as the planet continues to warm.

“Understanding climate extremes, like floods and droughts, in the Midwestern U.S. has important economic consequences,” Muñoz says. “We need to understand what we’re in for, and be able to confidently project how the likelihood of extreme events will change going forward.”

According to reconstructions of our past climate, there was a period of unusual warmth and dryness in North America about 1,000 years ago. Researchers have previously used tree rings to determine that this period, known as the medieval warm period or the medieval climate anomaly, was marked by severe droughts in the Midwest.

But drought can be caused by multiple factors, Muñoz says. His team used newer techniques that allowed them to reconstruct the temperature more directly.

The researchers looked at organic molecules produced by microorganisms that are ubiquitous in soils and sensitive to temperature. When their living conditions get warmer or cooler, these microorganisms create more of one molecule type or another. By examining the mix of these molecules left behind in the mud, Muñoz and his team were able to infer past temperatures within about two degrees Celsius.

“This is the first time we’ve reconstructed temperature in this region,” Muñoz says. “And it shows that it was quite warm.”

Layers of mud collecting on the bottom of lakes over thousands of years can provide clues to understanding the past. Photos by Matthew Modoono/Northeastern University

Their results showed a significant increase in temperature in the Midwest during this time period. And that warming matched up with periods of prolonged droughts and severe flooding in the region, which can be indicated by records from tree rings and wind-blown sand dunes, as well as the size of particles in the mud in Muñoz’s lab.

When a river overflows, the force of the moving water can carry larger sediment particles into nearby lakes, says Brynn Hamilton, a fourth-year physics student at Northeastern and an author on the paper.

“If we run into any layers that have a lot larger particle size on average, it suggests there was really high velocity water coming into that lake, which is probably a flood event,” Hamilton says.

For Hamilton, who is interested in pursuing research in geophysics and environmental modeling, her time in Muñoz’s lab was an opportunity to get her hands dirty.

“I had worked with environmental models before, but I’d never actually had the data in the mud in front of me,” she says.

The team’s results lined up well with what climate models have indicated for the medieval warm period, which helps to validate the accuracy of those models in predicting what’s to come.

Although temperatures in the Midwest are rapidly approaching what they were 1,000 years ago, it’s not for quite the same reason. The warming in the past was likely caused by a global decrease in volcanic activity—volcanoes throw gases into the atmosphere that reflect solar energy back out into space. Our current warming is due to a man-made excess of carbon dioxide and other insulating gases in our atmosphere, which act more like a heat-trapping blanket.

“This past warm period is not a perfect analog for the future,” Muñoz says. “But by understanding it, we can be more informed about what is coming.”