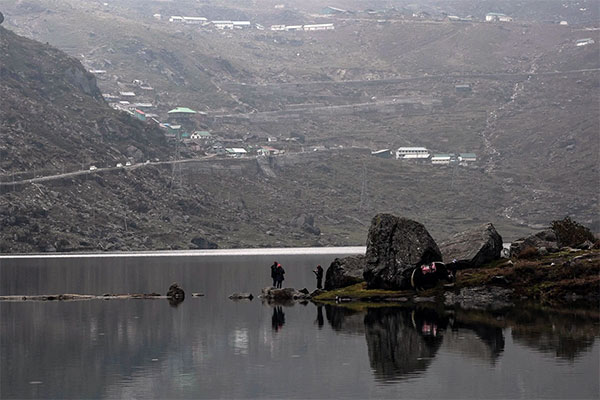 The 2019 Nepal-India “Dialogue of Civilizations” on Climate Change Science and Policy was an arduous educational journey through Nepal and India during the summer months and into the monsoon. The trip started in Kolkata, the cultural capital of India, where the group was treated to an exclusive performance by the famous Bengali folk song group Dohar and visited the eastern zone cultural center. A visit to Mother Teresa’s place, a boat trip to Belur Math founded by Swami Vivekananda, and even a presentation on Artificial Intelligence, were some of the highlights. The Kolkata experiences, as well as a day trip to the Sundarban region, presented perspectives on a megacity and a coastal region which are among the most vulnerable to climate change. Our trip to the Himalayas, where glaciers are threatened by climate change, covered Sikkim in India as well as Kathmandu and Pokhara in Nepal. We took a plane ride to observe the world’s highest mountain peaks, including the majestic Chomolungma (the tallest mountain peak in the world), the height of which was first measured by the mathematician Radhanath Sikdar who happened to work in an office managed by one Mr. Everest. The group visited lakes and glaciers, as well as the high Pakyong airport, which has been called a technical marvel. From iconic Buddhist monasteries in Sikkim to traditional Hindu temples in Nepal, from a top scientist studying glaciers in Nepal to talented engineers designing airports in India, from a diplomat who represented Nepal at the United Nations to an extraordinary mountaineer with world records in climbing, the vastness and majesty of the Himalayas were matched by the diversity and genius of the peoples. The group came down reluctantly back to the plains and were confronted by the maximum city of Mumbai, the financial capital of India, where the slums and the riches provided a striking contrast demonstrating how economic inequality may exacerbate the impacts of climate change and extremes. A visit to the elite Indian Institute of Technology Bombay and another to the powerful think tank called Observer Research Foundation provided glimpses of climate science, engineering, social science, and policy, with a focus on India. Mumbai is a city that celebrates diversity, as exemplified in her religious pluralism with Hindus, Muslims, Christians, Jains, Buddhists and Sikhs co-existing harmoniously, as well as her continued ability to shelter and adopt peoples from faiths that have been or are subjected to the worst forms of persecution: ranging from Jewish and Zoroastrian peoples to Ahmadiyya Muslims. However, perhaps despite this, Mumbai has also suffered from some of the worst terror incidents, including the infamous attacks of November 26, 2008. Our group stayed in Colaba in old Mumbai, which bore a major brunt of the attacks, yet remains strong to this day, as well as the upscale Juhu beach complex where the students organized and participated in a beach cleanup event. Within the state of Maharashtra, the group visited the UNESCO world heritage sites of Ajanta and Ellora, two marvels of ancient sculptures carved out of sheer rock. The caves of Ellora, which showcase Hindu and Buddhist sculptures, were built from the 6th to the 8th centuries CE, and contain the Kailasa temple, the largest rock cut monument in the world. The Ajanta caves, built from the 2nd century BCE to about 480 CE, are rock-cut cave monuments representing Buddhist sculptures and have been highlighted as the highest forms of such art world-wide. However, the bus journey from the nearest city to the Ajanta caves is not an easy one especially in the summer and passes through a region of India where farmer suicides in recent years have been among the highest. The impacts of climate change and human neglect are beginning to get noticed, all the way from the gradual decay of the ancient world-heritage sculptures to the severe strains in the livelihoods of the weaker sections of society in modern times. The visit included a trip to God’s own country of Kerala, from the heavenly mountains of Munnar to the houseboats of the backwaters all the way to the beaches of Cochin. The group stayed in a tea and cardamom estate, on a houseboat, and in a yoga care center, and enjoyed the traditional dance forms of Kathakali as well as Kalaripayattu, a traditional form of martial art. One of the highlights of the Kerala trip was the on-stage performance by SDS Lab PhD student and Dialogue co-instructor Kate Duffy. In between the trips, the students learned about the intricacies of climate science from chaos theory to models of disparate complexity, engineering aspects of climate risks and resilience, as well as economics and policy imperatives. The two courses, one on climate science and engineering and the other on adaptation and policy, culminated in two climate change war games: the first focused on multi-sector adaptation debates within India and the second on multi-stakeholder mitigation discussions focused on South Asia.

See other videos from the trip