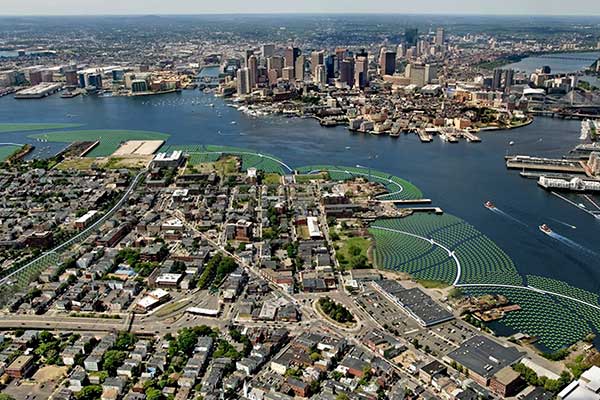 CEE Assistant Professor Julia Hopkins is working to design an “Emerald Tutu” of floating wetlands to protect shorelines from waves and coastal erosion.

People have heard of Boston’s famed “Emerald Necklace” with its network of parks and green spaces.

Northeastern University assistant professor Julia Hopkins hopes that Boston soon will be known for the “Emerald Tutu,” a system of interconnected circular mats of floating vegetation that can be arranged in rings and semicircles to protect urban coasts from sea level rise and intensified storms.

Like land-based parks, the Emerald Tutu is designed to feature walkways that get people out in nature—in this case out on the shallow waters of coastal shorelines.

But in addition to being aesthetically pleasing and recreational, the Emerald Tutu would absorb wave energy and help ameliorate the flooding that increasingly threatens to inundate Boston and other coastal cities.

“It functions as a marsh without being a marsh,” says Hopkins, who specializes in civil and environmental engineering and is lead scientist for the Emerald Tutu startup.

The circular mats that make up the components of the tutu are about seven feet in diameter and are designed to have marsh grasses growing on top and seaweed below.

“They are like a sponge. They absorb wave energy,” Hopkins says.

“The basic idea takes some of the theory we have about how nature is supposed to be protecting shore and applying that to something we can use in urban environments,” Hopkins says in a Northeastern University College of Engineering article.

The Emerald Tutu project was developed by Hopkins and other collaborators, including architect and Tutu project leader, Gabriel Cira, and Northeastern alumna Louiza Wise. It received a Small Business Innovation research grant from the National Science Foundation in 2020 to develop the floating wetlands.

Hopkins, who has tested mats in the massive wave energy basin at Oregon State University, deployed the Emerald Tutu’s first mat off a pier in East Boston in the spring of 2021.

Made up of biodegradable material such as coconut fiber, wood chip byproduct, burlap canvas and marine-grade rope, the mats won’t pollute the environment if they break loose and are lost at sea, Hopkins says.

She says she was delighted when researchers pulled the East Boston mat out of the water in late summer of 2021 to see what was growing on it and found it was loaded with marine plants.

“It had so much vegetation. We didn’t expect as much grass or seaweed to grow. We didn’t realize it would colonize that easily and that much.”

The more vegetation, the greater the wave absorption, Hopkins says. “Density improved the performance of the network.”

Currently, the Emerald Tutu project has one mat in the water near Salem with a second set to be launched in Boston Harbor in cooperation with the Stone Living Lab at any time.

Plans are in the works for a massive pilot project next summer, but the exact location is still to be determined, Hopkins says.

The variety of waters in a complex, open-harbor watershed system—salty, brackish and estuarine—will yield a lot of information about how the mats perform in ocean waves and what plants grow in different environments, Hopkins says.

One idea would be to ring parts of East Boston, which is particularly susceptible to flooding, with concentric rings of the Emerald Tutu, Hopkins says.

Tutu developers can’t just install the floating mats without the cooperation of numerous officials and agencies, including harbor masters and other transportation authorities such as Logan and the Massachusetts Port Authority.

It’s important not only to work with these agencies but also to involve residents and community leaders in efforts to transform the land and seascape to reduce the impact of environmental change, says Moira Zellner, Northeastern professor of public policy and urban affairs.

She and Laura Kuhl, Northeastern assistant professor in the School of Public Policy and Urban Affairs, together with Hopkins, are the new recipients of a Tier 1 grant from Northeastern to work with communities on projects such as the Emerald Tutu. The focus is on looking at coastal adaptation through a climate justice lens.

“We have to invest in relationship building” and include the voices of people from minority and low-income neighborhoods before researchers can try things out, Zellner says.

Coping with sea level rise and storm intensification as a result of climate change is a huge challenge for the Boston area, much of which is built on reclaimed wetlands.

“It’s not going to be one solution. It’s going to be building up a portfolio. The Emerald Tutu is expanding the options,” Kuhl says.

“This is really about the vision communities have for what they want their future to look like,” Kuhl says.

“There is no right answer here,” only a series of options, which could include eventual relocation of communities, Kuhl says.

For now Hopkins, who spent three years studying in the Netherlands, hopes that projects like the Emerald Tutu buy the Boston area more time to come up with solutions to the challenges posed by climate change.

The Emerald Tutu project is the first to deploy floating wetlands in the ocean, Hopkins says. She says the modular system could be duplicated in coastal cities around the world.

The project is getting buzz—in December Hopkins talked about the Emerald Tutu as the first presenter at MIT’s Water Summit.

Nature-based solutions have some benefits over traditional seawalls and levees in that they encourage interaction with the environment and can accommodate changing water levels and wave intensity, Hopkins says.

“Hardscapes are not adaptable. We need to have adaptable infrastructure,” Hopkins says.

“The Emerald Tutu is just one example of what could work,” she says.

“We just need to prove it works.”