People and Atmosphere Make a Difference 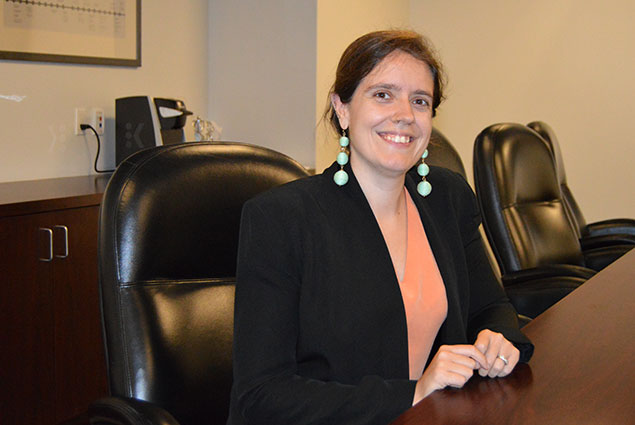 Angelina Jay, who graduated about a year ago with a PhD in Civil Engineering 2017, thinks that Northeastern’s atmosphere and people are among the most valuable things about the university.

“I really enjoyed it here, at Northeastern,” she said. “The faculty and the staff, every single one of them was great and amazing to work with.”

Jay did her bachelor’s in Aerospace Engineering at Boston University. She took a year off after graduation and then applied to Northeastern’s Civil and Environmental Engineering program. At first, she was not sure exactly what she wanted to do, but she always knew that she wanted to do more than just computational modeling; she wanted to do experiments. Jay spent countless hours at Northeastern’s STReSS laboratory, Structural Testing of Resilient and Sustainable Systems, located in Burlington, Massachusetts.  She had always been interested in the intersection of engineering and public policy, so she realized that structural engineering was a perfect fit for her.

“I was really interested in mechanics, so structural engineering was kind of another application of mechanics,” Jay mentioned.

For her research, she and her advisor, Associate Professor Andrew Myers, worked with a company that designs spirally welded wind towers—Keystone Tower Systems. They were working on developing a way to design taller wind towers, and a big part of her job was testing them.

“We were interested in seeing if very slender towers with these welds can still be designed using existing codes,” she said.

Now Jay lives in New York City and works at a forensic structural engineering firm. She is an associate at Exponent, an engineering consulting firm with offices all over America and internationally. She does a lot of travel and her primary responsibilities include site inspections and supporting expert witnesses in arbitration. Nevertheless, she has an opportunity to work with different departments and get a wide range of experiences.

“It is a decently sized company that works across a lot of different disciplines,” Jay mentioned.

Her connections at Northeastern greatly helped her to get the position. Another alum of Northeastern that works at Exponent came to the university to give a talk, and Jay decided to use that opportunity to pursue a position with the company.

“Northeastern kind of made that connection and made it easier for me to apply and get that job,” she said. “I think that was really important.”

During the years of study at Northeastern, she gained many great connections within the Civil Engineering department, and she keeps in touch with many people she met. One of them is Jerome F. Hajjar, professor and chair of the Civil and Environmental Engineering Department. Professor Hajjar runs the lab where Jay completed her experiments, so she had a chance to work closely with him even though he was not her advisor.

“I cannot wait to see other cool stuff that comes out of the lab!” she said.

Jay did not want to leave Boston after graduation, but she knew that Exponent had a great reputation and an amazing structural engineering office in New York. Now, as she is working for the company, she is dealing with complicated issues on a daily basis, which often reminds her of her work in Northeastern.

“Sometimes the easiest way to solve a complex problem is to go back to something really simple before you acknowledge complicated factors,” she said. “This always reminds me of going back to class.”

Jay believes that Northeastern gave her a solid background in structural engineering and helped her to get a great job in the industry. She is happy she did her PhD in such a supportive environment with people always willing to help.

“Maybe if I went to another, or bigger school, I might not have the same kind of atmosphere that Northeastern definitely has,” she mentioned.