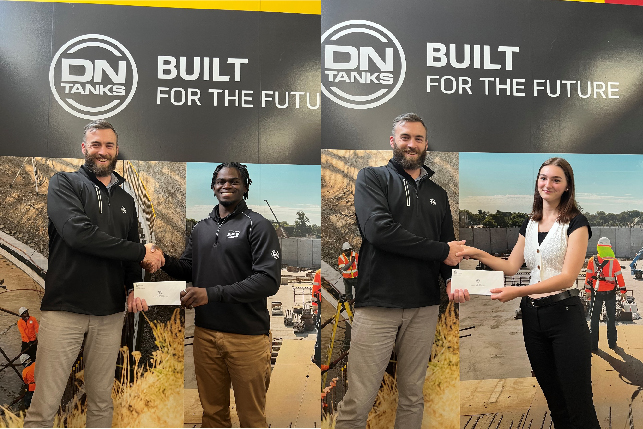 Ann became a valuable member of their Engineering Department during her co-op, working on projects in Minnesota and Canada. In an announcement from DN Tanks, they praised her for being “integral in the implementation of shoring drawing packages for a new shoring configuration as well as testing the new, simplified Bill of Materials included in each set of shoring drawings. Her dependability and excellent communication skills created opportunities for her to work with several engineers throughout the company on projects across the country (and Canada). Ann showed consistent improvement which led to increased efficiency, and she displayed an impressive ability to effectively manage a heavy and diverse workload.”

Malakhi Oliver, who came to Northeastern from Florida, was praised for his exceptional attitude and productivity. “We have been impressed with Malakhi’s ability to absorb and retain information from several sources and experiences and use this knowledge to increase performance,” said the company in an announcement. “He is very self-aware and can easily recognize when and how to seek help or figure something out on his own. His high performance has established a level of trust throughout the department that has allowed him to be involved with some large and complex projects including Fairmount, NY, Georgetown, TX and Houston, TX. Malakhi is always willing to lend a helping hand and truly exemplifies the WE NOT ME value.”