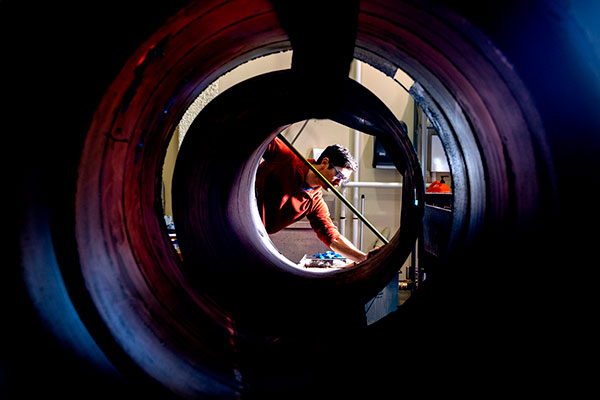 CEE Associate Professor Andrew Myers and co-inventor Jim Papadopoulos were one of 18 groups awarded funding by the Massachusetts government from a new $1.7 million grant. The funding, distributed by Massachusetts Clean Energy Center’s (MassCEC) Catalyst and InnovateMass programs, will support clean energy startups and research teams across the Commonwealth. With the funding, Myers, Papadopoulos, and their team will develop an innovative floating wind turbine.

“Massachusetts is home to a robust startup community that makes valuable contributions to our state’s nation-leading innovation and clean energy economies,” said Energy and Environmental Affairs Secretary Kathleen Theoharides. “As Massachusetts takes action to mitigate the impacts of climate change, these researchers and entrepreneurs are pursuing groundbreaking advancements in technology that will help the Commonwealth lower peak demand and reduce greenhouse gas emissions.”

The United States is well-positioned to take advantage of offshore wind energy. In fact, there is enough wind off the East Coast to power the whole country, should we develop the means to harness, store, and distribute it at scale. The waters off Massachusetts are particularly wind-fertile, but there exist technological, infrastructure, and logistical barriers to making the Bay State a leader in this form of clean energy. Myers has long envisioned the United States and Massachusetts as leaders in the wind energy sector, and his Catalyst project has a novel solution for many of the challenges the industry faces.

The most common design for offshore wind turbines is a large structure affixed to the sea bed. This presents a variety of obstacles for rapid and large-scale realization of U.S. and global wind potential and is limited to relatively shallow water depths. These large turbine towers also require complex manufacturing processes currently only available in Europe. Massachusetts and other states in the U.S. would need to source their towers overseas and ship them across the Atlantic. The U.S. would also need to employ large installation equipment, most likely also sourced from European countries where the offshore wind energy industry is robust. The solution: a reimagined floating wind turbine that is lightweight and low-cost and can be manufactured and launched in shallow ports using capabilities and infrastructure presently available in Massachusetts and the US.

The idea provides several appealing competitive advantages. Local manufacturing boosts the local economy and eliminates transportation costs from the long journey across the Atlantic. The floating nature of the turbines makes them easier to install and service. They can be deployed in oft-windier deep-water regions where bottom-fixed turbines are unfeasible, increasing the total potential area for wind farming. While various floating wind turbine designs are currently in use and under development, Myers’ and Papadopoulos’ design will have a shallow-draft, making it launchable in shallow ports, and will have the ability to yaw freely in the water – essentially repositioning to align the blades with the direction the wind is blowing and enabling a wider, more efficient support structure

In partnership with a local company, Blue Atlantic Fabricators, Myers and Papadopoulos believe they can prove both the technical and economic efficacy of their redesigned floating turbine as a cheaper, superior option for both domestic and international wind energy ambitions.

It’s hard to anchor wind turbines to the ocean floor. He’s building one that floats.

Andrew Myers, an associate professor of civil and environmental engineering at Northeastern received a $1.7 million grant by Massachusetts Clean Energy Center’s (MassCEC) Catalyst and InnovateMass programs, which will support the development of an innovative floating wind turbine. Photo by Matthew Modoono/Northeastern University

If you’re a wind turbine, there’s one place where you’d want to be. Far from the shore, out in the open ocean, and particularly in the North Atlantic, where the wind’s energy could potentially power an entire country the size of the United States.

But harvesting wind energy in the ocean has posed an engineering feat that requires specialized equipment to manufacture and install heavy towers and propeller-like blades to catch the wind.

Those towers—massive steel structures larger than the Statue of Liberty—need to be affixed to the seafloor. That means wind energy is a resource that can only be tapped in shallow waters, and that turbines need to be constructed at sea. Andrew Myers, an associate professor of civil and environmental engineering at Northeastern, and his collaborator, Jim Papadopoulos, intend to change that. Myers envisions a process by which wind turbines could be built in U.S. boatyards, launched in shallow ports, and then towed out to the sea.

For the past two years, Myers and Papadopoulos have been designing a super light wind turbine that floats in the ocean and that can be installed in both shallow and deep waters. This kind of turbine, anchored to the seafloor, is also designed to reorient itself naturally to face the wind.

The offshore wind industry is in its early stages in the U.S., where only one offshore wind farm exists, off Block Island, Rhode Island. As with almost every other offshore wind farm in the world, the five turbines at Block Island are fixed to the seafloor.
On the West Coast, the story is more complicated. The depth of the ocean begins to drop much closer to the shoreline than on the East Coast, where the ocean remains relatively shallow for about a hundred miles.

“Think about California and all those cities there—the entire West Coast is too deep for fixed-bottom wind turbines,” Myers says. “Their only chance of harvesting offshore wind power is with floating wind turbines.”

Andrew Myers, an associate professor of civil and environmental engineering at Northeastern received a $1.7 million grant by Massachusetts Clean Energy Center’s (MassCEC) Catalyst and InnovateMass programs, which will support the development of an innovative floating wind turbine. Photos by Matthew Modoono/Northeastern University

That’s one reason why Myers sees promise on wind turbines that float—but with some tweaks. Current designs for floating wind turbines mostly involve heavy steel structures that keep them steady in the rough seas of the open ocean. Most of that weight is meant to help the structures stay relatively still as waves pass by. With a new design, Myers is embracing a different philosophy.

“A lightweight turbine with a shallow draft is cheap to build and easy to launch, but will move with the waves,” Myers says. “If we can design for these motions, the result is a very cheap turbine.”

Conventional turbines rest atop thin towers. Although such towers are structurally inefficient, they are necessary so that a turbine’s blades can rotate to face the wind without striking the tower.

Myers’ team, however, designed an entire floating system that can rotate and face the wind naturally, with blades attached to a wide tower that uses less steel. He says that efficient design, as well as the amount of materials needed for it, will result in reduced costs.

“For a floating wind turbine, we think it’s a much cheaper solution to have the whole system weathervane in the water to align with the wind,” Myers says. “It’s steel, the same material [as fixed-bottom turbines], but we’ve oriented it in a way that is more efficient.”

Those ideas earned Myers an award from the Catalyst and Innovate Mass program of the Massachusetts Clean Energy Center, which he plans to use to develop and test his turbine’s design.

The plan is to conduct tests in a wave tank, which can be used to study the dynamics of the turbine in heavy seas. The tests will also include computer simulations that will analyze how the floating structures will respond to the large waves and strong winds of the ocean.

“The durability of our concept under large storms, like hurricanes, is something we have to prove,” Myers says.