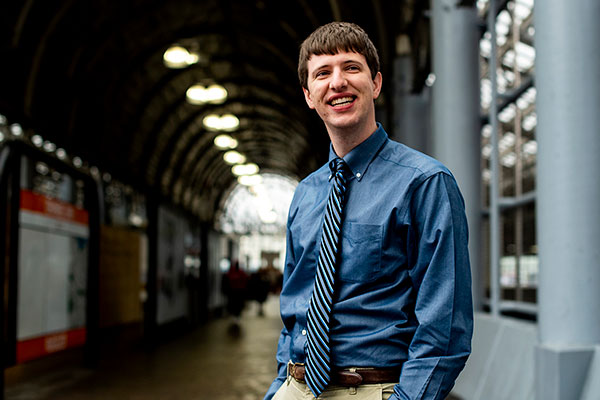 CEE student Michael Tormey, E’20, was awarded the prestigious Marshall Scholarship which will allow him to study transport engineering for two years in the United Kingdom.

Michael Tormey, who studies civil engineering and economics Northeastern, was awarded a Marshall Scholarship, which he will use to study transport engineering at the University of Leeds and the London School of Economics. Photo by Ruby Wallau/Northeastern University

Michael Tormey, who grew up in a town of 3,622 people with no traffic lights, dreams of creating urban transportation systems that will turn congestion into efficiency, and misery into joy.

As a Northeastern fifth-year student who has combined the study of civil engineering and economics, Tormey said he has developed a passion for sustainability.

“It has shaped me to think about problems in these big-picture ways, to not just be satisfied with the status quo,” he said.

Tormey, a Northeastern student from Orrington, Maine, has been awarded a Marshall Scholarship, which will allow him to study transportation for the next two years in the United Kingdom.

The Marshall Scholarship Program was launched in 1953 as a gesture of appreciation to the U.S. for the assistance it offered to the U.K. after World War II under the Marshall Plan. Pulitzer Prize winners and Supreme Court Justices have benefited from the scholarship, which enables Americans to study at U.K. universities for up to three years.

“As a student combining engineering and economics, Mike understands that real impact can be made at the intersection of technology and society,” said Joseph E. Aoun, president of Northeastern University. “His passion for learning through the boundless experiential opportunities Northeastern offers has set him on a global path to success. The Marshall Scholarship is a recognition of all of his achievements and paves the way for a limitless future.”

Tormey believes he will broaden his perspective in the U.K., which has been a global leader in public transportation dating back to its development of the first steam locomotives and underground railway.

“Understanding how the U.K. approaches these challenges— learning from their successes, learning from their failures—will be really instructive for me,” he said. “Since World War II, we have been moving people [primarily] by car. It is unsustainable and inequitable.”

Tormey’s eventual goal is to work on behalf of a U.S. city, in collaboration with a cutting-edge team of engineers and city planners, to develop a coherent and efficient system of public transit that can reduce car accidents, pollution, and time lost to sitting in traffic—all while making everyone happier.

His aspirations are founded in tangible reality. Tormey will graduate in May in civil engineering (transportation) as well as in economics—an interdisciplinary combination that has opened his imagination and guided his ambitions.

“Civil engineering gives me the technical problem-solving skills. The economic side gives me the big policy picture,” he said. “I really find economics interesting when dealing with how people make decisions, and shaping decisions through incentives.”

Tormey’s pursuit of sustainability has been influenced by a global blend of experiences during his five years at Northeastern, including co-op positions that have immersed him in city and transit planning. In three trips via Dialogue of Civilizations, an intensive, faculty-led study-abroad program at Northeastern, Tormey visited India (where he studied climate-change science and policy), Singapore and Indonesia (the focus was on green space to promote resilience and sustainability in cities), and Tokyo (political science and urban development). Auroop Ganguly, a professor of civil and environmental engineering at Northeastern, met Tormey in a class he took to prepare for his trip to India. Ganguly said he recognized in Tormey an uncanny ability to digest information from one discipline and apply it to another.

For example, in Ganguly’s class, students learned about climate change. Scientists need to know that a warming planet means major flooding in many areas around the world. Engineers need to know how to prepare a city to withstand that flooding.

“Michael can bring quantitative and qualitative concepts together and translate them in a way that makes sense,” Ganguly said. “He’s a very well-rounded engineer in that he can digest scientific principles, translate them into engineering principles, and then use his knowledge of economics and policy to inform the conversation.”

Thomas Vicino, associate dean of Graduate Studies in the College of Social Sciences and Humanities, who leads the Tokyo-based Dialogue of Civilizations program in which Tormey participated, described him as “someone who can take in a lot of information quickly, then has an ability to synthesize the problem and think about different solutions.”

“His dream is to change policy to make transportation work for everybody,” Vicino said. “It’s a sustainability issue: We have to get cars off the road, change how we build cities, fundamentally change how we live and work, and get from point A to point B.”

Tormey will spend his first year at the University of Leeds, where he will study transportation planning and engineering, to be followed by a year at the London School of Economics, where his focus will be on regional and urban planning studies. The blend of engineering and policy will be crucial to his long-term plans, he said.

“Where I see myself being able to make a difference is in the large-scale discussions and trade-offs,” Tormey said. “The transit team can have a fight with the engineering team about a bus lane. But that could be solved if we have local and regional policy prioritizing bus lanes—and we’re making those decisions based on engineering analysis, and people-focused community planning.”

Tormey will be up to the challenges, predicts Hilary Sullivan, director of co-curricular service programs at Northeastern’s Center of Community Service. Tormey was a two-time coordinator of Northeastern’s Alternative Spring Break initiative, in which volunteers devote a week to a critical social issue.

“He’s just so full of energy—one of the most energetic students we’ve ever met,” Sullivan said. “He’s really good at thinking about how everybody benefits if things are done in a way that’s respectful of everyone in the process.”