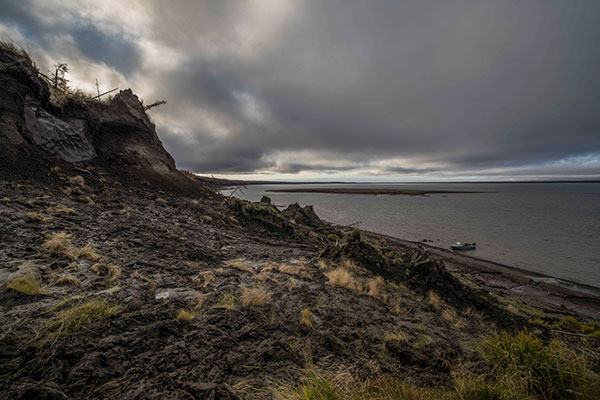 COS/CEE Associate Professor Aron Stubbins is investigating the source of the black carbon located at the bottom of the oceans.

The deep ocean is not on fire. So what’s all that soot doing in there?

Main photo: The Kolyma River in eastern Siberia was sampled for a global study of black carbon in rivers and oceans by a team of researchers that included Aron Stubbins, an associate professor of marine and environmental sciences at Northeastern. Photo courtesy of Aron Stubbins

We can probably all agree that the deep sea is not on fire.

But the charred, powdery soot that results from burning things like forests or fossil fuels makes up an important part of the carbon dissolved in the ocean. So how in the world did that soot, which scientists call black carbon, get there?

Thanks to charcoal found in the fossil record, scientists know that wildfires have happened for millions of years, since the first trees appeared. The soot that’s leftover—black carbon—makes up about 10% of all the carbon in Earth’s soil, and until recently, scientists thought that rivers were washing it into the ocean. Aron Stubbins, an associate professor of marine and environmental sciences at Northeastern, teamed up with a group of researchers who tested the long-established idea that rivers eventually transport black carbon into the ocean.

The team’s findings, published in Nature Communications, show that the dissolved black carbon found in rivers doesn’t match the readings of black carbon dwelling in the ocean.

A group of researchers that includes Aron Stubbins, an associate professor of marine and environmental sciences at Northeastern, is challenging the assumption that rivers transport black carbon into the ocean. The team’s analysis included samples from the Amazon, the Congo, and other major rivers of the world. Photos courtesy of Aron Stubbins

The current study follows up on research Stubbins did in 2012, which revealed that if black carbon in the ocean is exposed to sunlight, it can turn quickly into carbon dioxide, which plays an important role in controlling Earth’s climate by trapping heat. That’s one of the reasons why it is important to know what happens to black carbon from the beginning, as leftover char on land, until it makes it to the ocean, Stubbins says.

“It’s a lot of carbon,” says Stubbins, who is also an associate professor of chemistry and chemical biology, and civil and environmental engineering at Northeastern. “We want to understand how it cycles to understand if it will ever end up in the atmosphere as carbon dioxide.”

The team’s work off the coasts of Savannah, Georgia, had already hinted at differences between black carbon in rivers and the ocean in 2017. Now, the idea was to test black carbon dissolved in rivers and oceans at a global scale, Stubbins says. To do that, they would need to test waters far offshore, and as deep as possible. The Pantileikha River, a tributary of the Kolyma River, viewed from the Northeast Science Station in Chersky, Siberia. Stubbins took samples from the Kolyma as part of a study to trace the source of black carbon dissolved in the ocean. Photo courtesy of Aron Stubbins

The team sampled the North Pacific and North Atlantic oceans and was led by Sasha Wagner, a former postdoctoral researcher at Northeastern who is now an assistant professor of earth and environmental sciences at Rensselaer Polytechnic Institute in Troy, New York. The analysis also included the Amazon, the Congo, and other major rivers.

Near the surface and at several depths, the team probed nearly pure oceanic water, Stubbins says. If you dive 3000 meters deep (about 2 miles) into the waters of Hawaii, for example, you will be swimming in water that hasn’t seen the surface of the ocean for hundreds of years. That same water hasn’t been near land for even longer. Aron Stubbins is a professor of marine and environmental sciences at Northeastern. Photo by Adam Glanzman/Northeastern University

“When we went to the black carbon in all those oceans samples [at different depths], we found that they had a fairly consistent signature with one another,” Stubbins says. “But they were really different from river water samples.”

Spotting those differences was possible with analysis of stable carbon isotopes, non-radioactive forms of the same atom that have different numbers of neutrons but the same chemical properties.

Stable carbon isotopes can be used to trace things found in nature, such as black carbon, back to their origins. On land, plants mark carbon particles with a different isotopic signature than phytoplankton in the ocean. When carbon dioxide is absorbed from the air and enters terrestrial plants, they integrate carbon-12, the most abundant carbon on Earth, more efficiently than carbon-13.

“Essentially, the C-13 is a bit bigger, a bit heavier, a bit slower,” Stubbins says. “So, it gets fractionated, and it is left behind.”

It’s an unexpected mystery from the deep sea: Where did the black carbon dissolved in the ocean come from?

The next step, he says, could be focusing on matching oceanic black carbon with the isotopic signatures of other atmospheric particles, or thinking of other ways in which this carbon could end up in those waters.

“The bottom of the ocean has large stores of organic carbon that may have been processed differently in the past,” he says. “Maybe somewhere in there, there’s a clue for the source of this material.”

Related Article: Nearly eight million tons of plastic is missing from our oceans. Where did it go?