Immersive experiential education at its best 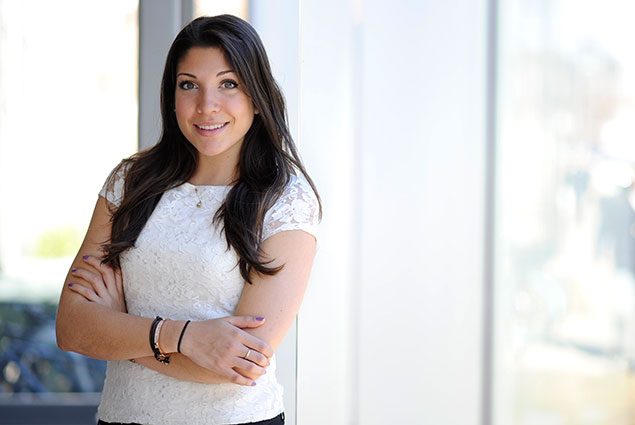 Julieta Moradei, BS, Civil Engineering, 2016—originally from Argentina, spent the early years of her education in Montreal, Canada. She is a member of the class of 2016 majoring in civil and environmental engineering. Julieta has taken an interdisciplinary approach to her education and has leveraged clubs, such as Engineers Without Borders, co-ops, and coursework to create a unique collection of high impact learning opportunities.

On her first co-op, she worked with a top structural engineering firm, where was was able to integrate civil engineering with architecture. Through this experience, she had the opportunity to work on a major project, attend conferences and meetings, and to mentor. As a result of this opportunity, she found her structural analysis course to be highly relevant and motivating.

Julieta returned to work at Simpson, Gumpertz & Heger during the next two summers. While there, the CEO asked her to write a book on what it means to be successful. During her work on the book, she interviewed 150 of the most successful employees throughout the organization, from engineers to managers, to human resources personnel. She also helped develop the cover and publish this book.

During her second co-op, Julieta worked in a project management role, where she worked with a budget and a production process. She was then able to leverage this experience in her work with Engineers Without Borders, where she continued to volunteer throughout her undergraduate studies.

She returned to Disney for a second co-op where she was able to “use her civil engineering skills with a twist,” as she worked as a Structural Engineer with the Imagineers to develop and design trees with light and movement instead of building. Following this experience, Julieta initiated and organized a “Coolest Co-op Video” contest for Northeastern University students. She came in third place.

During her final year, Julieta had the opportunity to apply for the Rhodes Scholarships, which allowed her to reflect on and synthesize what she had learned through her journey. Through this experience, she realized that confidence was the best thing that happened.