Here’s What Could Have Caused the Building Collapse at Surfside 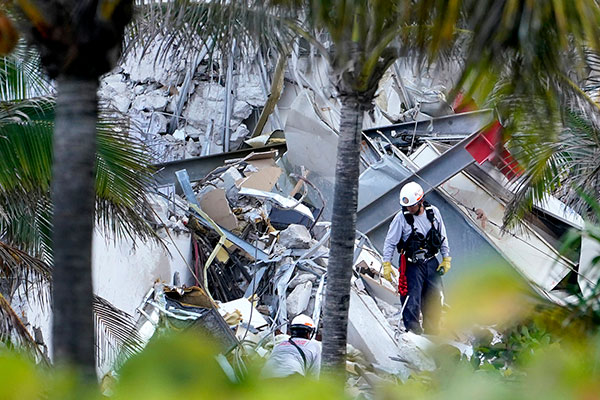 As first responders frantically search the rubble for survivors of a collapsed residential tower in Surfside, Fla., the investigation has already begun—and it is likely to focus on multiple causes, says Mehrdad Sasani, a professor of civil and environmental engineering at Northeastern.

“Usually, when there is a collapse, there are several factors involved,” said Sasani, who has researched the progressive collapse of structures, earthquake engineering, and structural integrity and reliability.

Two sections of the 12-story tower gave way without warning, one after the other, at 2 a.m. Thursday.

At least four people were dead and 159 people were unaccounted for, according to Miami-Dade County officials.

Sasani notes that U.S. building requirements changed in 1989—eight years after the construction of the Surfside building.

“There were [new] structural integrity requirements that would help the structure to be better integrated,” he says.

In the meantime, says Sasani, this should be viewed as a rare event. People should not be anticipating other buildings to crumble in the United States, he says.

What are the possible causes of the Surfside collapse?

In general, when a building collapses like this, the potential issues are either the foundation, the structure, or some accidental event that triggers the collapse, such as an explosion or a car impact—a car runs off the road, it hits a column, and then the building could potentially collapse.

But [one of those accidental events] does not seem to be the case here, based on the eyewitness accounts. Therefore, it’s either the foundation or structure.

There have been reports that the 40-year-old building had been sinking into the ground at a rate of 2 millimeters per year. Could this contribute to a foundational issue?

Bad soil, in combination with improper design or construction, could lead to a loss of support for the building. One good approach is to go back and look at all the information available about this building. Apparently, there have been concerns about the foundation in the past.

I would say if the foundation was the problem, potentially people would have seen damages that would have happened over time—and somebody would have done something about it.

What could be the structural issues?

A building goes through several phases. The first phase is obviously design.

Then the building is constructed.

Then, over time, the building could have been affected by negative impacts—environmental or other factors—that could affect the deterioration of the building. In this case the proximity to the ocean could have affected the concrete; and then, more importantly, it would lead to the corrosion of the reinforcing bars. And that could be a cause.

And then, finally, the collapse happens when the demand on the structure overcomes the capacity.

Are there examples of buildings collapsing because of design errors?

There was a building that collapsed in Singapore in 1986. It was constructed in 1971, and the designer had forgotten about the so-called dead load: The calculation did not include the weight of the building. Why did it stand up for 15 years and then collapse? Apparently, they put a heavy air conditioner on the roof, a few months before the collapse. The building was on the verge of collapse all the time, but that little trigger pushed the building over the limit.

How will investigators proceed?

The first thing is collecting data about that building that exists from the past—the design of the building, construction, any studies about buildings in that area that are sinking. Any of those reports are very helpful.

The immediate action is the search and rescue. But after that, they will be looking into the debris on the ground, trying to put pieces of the puzzle together. That is what forensic engineers do. A careful reconstruction of those pieces can provide some clues.

They will look at the portions of the building that are standing now, how they behaved, how the separation occurred. Those things can potentially help to identify the cause.

There has been a lot of talk about how we don’t see these kinds of collapses in the U.S. very often. Is it true that buildings in the U.S. tend to be safer than in other countries?

You would expect so. There are [in the U.S.] better ways of designing and verifying the designs, and in general better construction and inspection.

I can talk about earthquakes: When an earthquake of magnitude and intensity occurs, in some countries you have tens of thousands of casualties; in the U.S. you may have hundreds of casualties. That can be attributed to the way the design, construction, and inspections are done, which altogether would lead to better buildings.