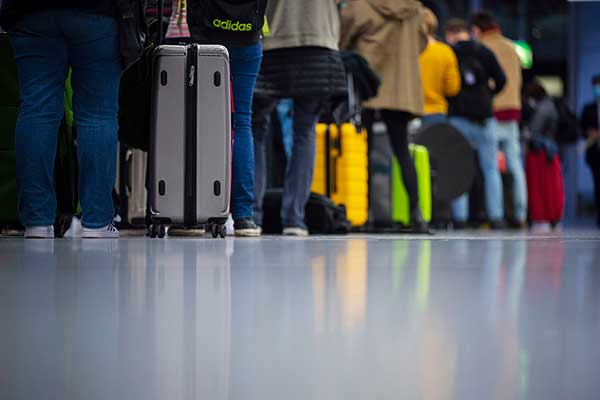 CEE Assistant Professor Qi “Ryan” Wang has been studying mobility models to see how people move and predicts that travel during the Thanksgiving break will be that similar to pre-pandemic levels.

Brace for a surge of holiday travelers

Eager to hit the road and reconnect with friends and family in-person this Thanksgiving after last year’s COVID-19 precautions meant celebrating the holidays at home?

A surge in holiday travel plans—combined with the recent opening of U.S. borders to fully vaccinated international travelers—means roads and airports will be more crowded. Add in a forecast for stormy weather along much of the East Coast and holiday travel looks downright turbulent.

Ryan Wang, a civil engineering professor at Northeastern, has been studying mobility over the course of the pandemic. As of October, travel patterns across the country have returned to pre-pandemic levels, he says. “Mobility hit bottom maybe two months after we declared a state of emergency, but it’s been steadily recovering, and at this point the total volume of mobility has recovered to the same level as before the pandemic,” says Wang, who uses data from smart devices like cell phones to measure how often people leave their homes and how far they travel.

More than 50 million people are expected to be traveling over the Thanksgiving holiday weekend, a 13% increase from last year, according to the American Automobile Association, which tracks travel statistics. Air travel has had the biggest boost, with 4.3 million people expected to fly the friendly skies this year as opposed to the 2.4 million in 2020, according to AAA.

The demand has already caught some airlines flatfooted. Southwest Airlines and American Airlines canceled more than 3,000 flights in just one October weekend thanks to staffing shortages and weather delays.

“There are just not enough flights per day on the popular routes, and that’s deliberate because the airlines want to be sure they’re going to fill the plane up,” says Ravi Sarathy, an international business professor at Northeastern who has extensive knowledge of the airline industry.

“They would rather have fewer flights that are full than offer more flights where some of them are at a break-even capacity,” Sarathy says.

Meanwhile, major U.S. airlines continue to lose employees despite the increase in demand. U.S. airlines employed 718,111 workers in September, the most recent month that records are available, according to the U.S. Bureau of Transportation Statistics. That’s 814 workers down from August and 24,289 fewer than in pre-pandemic September 2019.

“It’s a bit of a guessing game, because nobody had dealt with COVID-19 before, so nobody knew how fast traffic would recover,” Sarathy says.

Demand for flights plummeted during the pandemic, which led to employee layoffs and furloughs. Airlines either retired planes or delayed repairs and maintenance on them, meaning fewer are available now that demand is back.

“Whether it’s the ability to maintain some of the old airlines or the number of flight crew and pilots, they’re all in short supply,” Sarathy says.

Both Southwest and American Airlines started offering staff extra pay and other incentives in early November to bulk up staffing for the holidays and avoid a repeat of mid-October cancellations.