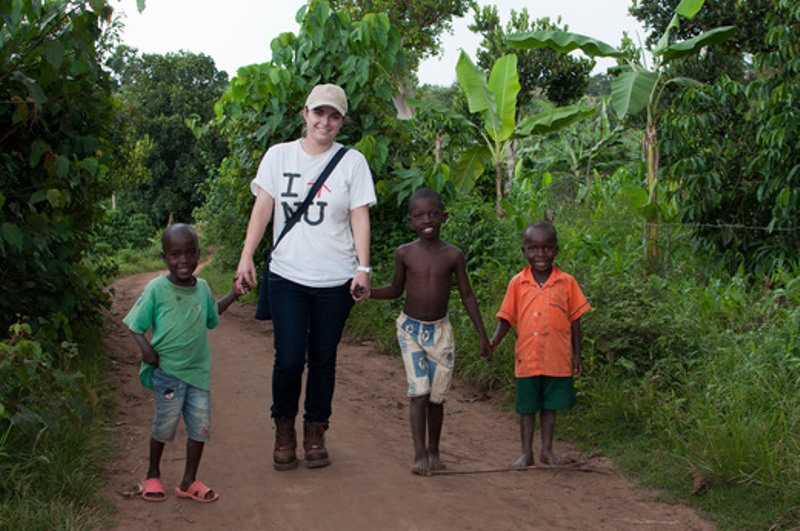 Gina Palino, BS, Civil Engineering 2013, whose peers laud her for her intense motivation to help less fortunate people around the world, served as Uganda program director of Northeastern’s chapter of Engineers Without Borders.  EWB-NEU, one of five student chapters in Greater Boston, built wells to provide fresh drinking water to Bbanda, Uganda, in 2010 and is at work on a water distribution system to pump water throughout the village. The project seeks to eliminate several hours that villagers spend traveling to and from the wells each week.

As the program director, Palino taught the Bbandans more about their water than the technical aspects of the projects.  In March 2012, to help the group return to Uganda, she helped raise $2500 in public funding through Northeastern’s Catalyst program.

Designing com­pounds on co-​​op with Mil­len­nium Phar­ma­ceu­ti­cals, a Cam­bridge, Mass.-based bio­phar­ma­ceu­tical com­pany, pre­pared Burns for his third coop at Dana-​​Farber. At Millenium, he cre­ated more than 100 mol­e­cules over two six-​​month experiential-​​learning oppor­tu­ni­ties with the company.  “I was doing cutting-​​edge chem­istry with new reagents and new chem­i­cals that sci­en­tists have just begun using in this decade,” he said. The under­grad­uate student-​​researcher said he quickly became an inte­gral part of the team. “Mil­len­nium did a great job of engaging me,” he explained. “I felt like I belonged there and that I was making an impor­tant contribution.”