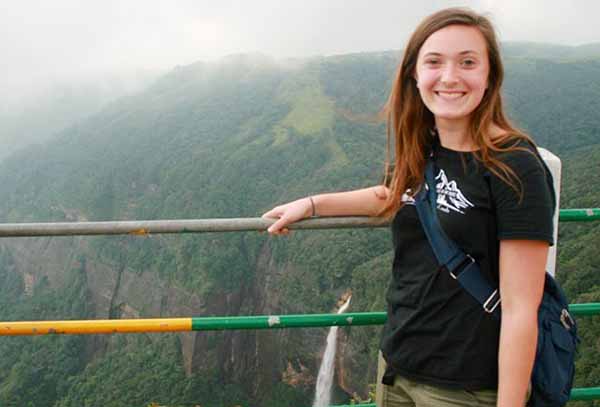 Sofia Catalina is a rising second year chemical engineer who hopes to minor in environmental science and sustainable business practices and someday use her engineering skills to solve environmental problems. At Northeastern, Sofia is involved with Engineers without Borders, the Society of Women Engineers, and does research with the ALERT and Gordon CenSSIS program.

Ever since I was a little girl, I dreamed of traveling. I did so mostly through books, reading of people journeying to far off places to discover a world so different yet so similar to their own. As I grew older, this passion for adventure abroad grew into a reality, and I have been lucky enough to venture to some amazing places. There is something indescribable about being in a place foreign to you, with a whole new set of smells, sights, cultures, traditions, people, and food all blending together into an air of excitement. Nothing can compare to this sort of first hand experience; no amount of reading or research can equal the deep understanding that comes with directly exploring a new place.

The opportunities available to students were what drew me to Northeastern, including their catchphrase “experiential learning.” Nowhere is this more evident than in Northeastern’s dialogue program, where students combine learning and traveling by taking two classes abroad with a Northeastern professor. The India Climate Change Science and Policy dialogue is a 6 week long journey, and while it has changed each year, the heat, culture, wonderful Professor Auroop Ganguly, and sheer magnitude of the trip remain the same. On this civil engineering dialogue, we studied Climate Hazards and Resilient Cities or Coastlines and Climate Adaptation and Policy in an Emerging Economy, two topics that are fascinating with regards to India. The 2016 dialogue took on a great breadth of places, journeying from Mumbai to Kolkata, Durgapur, Kharagpur, Shillong, Delhi, Agra, Udaipur, Jaipur, Ranthambor, and Ahmedabad. This travel schedule is grueling but worthwhile, as we made the most of our time in India. Due to its massive size, population, and history, India is a country of enormous depth and breadth, which we just managed to scratch the surface of during our time in country.

Common knowledge on India in the United States is limited: there is Bollywood, yoga, paneer tika masala, and the person on the other side of your customer service phone call, but few people know about the larger aspects of Indian culture. While there is the lovely music, dancing, culture, food, and beauty of Bollywood, there is also the desperate day-to-day struggle of the people in the slums of Mumbai. To prepare us for this, Professor Ganguly had us read Rashmi Bansal’s Poor Little Rich Slum, a piercing glimpse into life in Dharavi, the world’s largest slum. We later visited Dharavi, and I was surprised by the strong communities of people who worked industriously sorting plastic in dimly lit rooms and making pottery over trash-fueled fires. Being a student in the US is so far removed from this sort of lifestyle, and seeing the realities of millions of people’s daily lives puts “the struggles” of University in perspective. Worrying about an A- in Calc seems so incredibly trivial when compared to the daily uncertainty as to basic needs.

Over the course of the trip, it became evident that similar problems cropped up throughout India: the need to develop to improve the lives of its people versus the need to prevent an impending environmental crisis due to India’s reliance on coal. India is a country on the rise of economic prosperity, but also one of the largest greenhouse gas contributors in the world. As such, India will be a large player in the current global climate change crisis, and is the ideal place to look at climate change and policy. If India were to develop utilizing their coal reserves, it would take a possibly irreversible environmental toll. Climate change does not only mean warmer weather, but entails major flooding, droughts, unprecedented changes in weather patterns, and unforeseen natural disasters. The Indian monsoon, a period of heavy rains the country relies upon for agriculture and all other water uses, is already being affected by climate change, and increasing changes could be disastrous for India. As such, it is necessary to plan for the impending future, preparing a country of 1.3 billion for the hazards of climate change. We learned about these issues in both courses, and even became involved in our War Games, a simulation of a global conference. The first War Game focused on key sectors in India, Energy, Water, Agriculture, Industry, and Health Care, and in teams of five we each represented one of these sectors and fought over who should receive a small part of the budget to prepare for climate change resilience. I represented energy, which allowed me to delve into the various problems India faces from an energy perspective. Herein lies the same issue discussed earlier: large portions of the rural population do not have power, yet electrifying rural India must be accomplished without relying on fossil fuels.

Overall, India was an unforgettable experience. The crazy rush that is Indian daily life combined with dehydration, exhaustion, culture shock, intestinal distress, and homesickness proved to be challenging but worthwhile. We came to India to have experiences we couldn’t find elsewhere, and from riding an elephant up to the Amber fort to overturned buses to chairlifts at beach resorts to bartering in Jaipur to arguing with auto rickshaw drivers, we got what we came for. You can find our day-to-day experiences at http://northeasternclimatedoc.tumblr.com/, or to see a glimpse of all the people and a few of the places we visited, see https://www.youtube.com/watch?v=d5qf4-aqwkE.