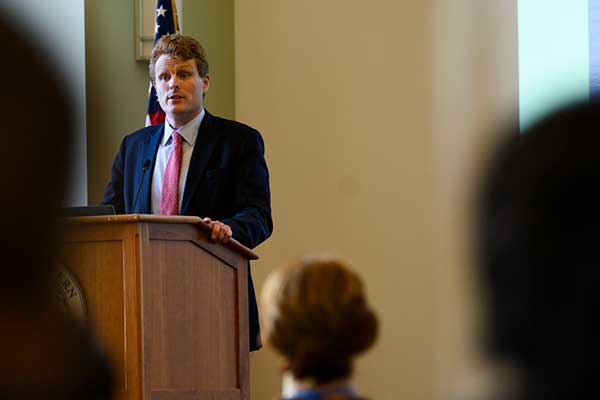 Boston is the hub of green energy, but offshore wind can’t only exist in the Northeast, experts say

He said that just as farmers, tradesmen and mechanics refused to buckle under the imperial demands of England, so too will today’s revolutionaries overcome the entrenched interests of the fossil fuel industry.

“You in this room have not only picked the right side of industry, you are driving it,” Kennedy said during Monday’s keynote address for the National Offshore Wind Research & Development Symposium 2022.

The two-day event was intended to generate ideas and collaboration among people in the fledgling offshore wind industry.

“This symposium comes at a really critical time,” said Kevin Knobloch, acting executive director of the National Offshore Wind Research and Development Consortium. “I don’t think we can overstate the challenges that are in front of us.”

The Biden administration has a goal of deploying 30 gigawatts of offshore wind in the United States by 2030. There is talk of ramping up the target to 110 gigawatts by 2050, Knobloch said.

“The sense of urgency is intense,” Knobloch said.

Offshore wind “is vital to the energy landscape of the United States,” said Andrew T. Myers, associate chair of the Department of Civil and Environmental Engineering at Northeastern.

The industry is currently in the early stages of development, with Block Island Wind off Rhode Island and Coastal Virginia Offshore Wind off Virginia.

Left: Andrew T. Myers, Northeastern associate professor and associate chair of the Department of Civil and Environmental Engineering gives welcoming remarks at the NOWRDC Symposium hosted in the Curry Center. Right: The NOWRDC Symposium hosted by Northeastern kicks off in the Curry Center ballroom with remarks from Kevin Knobloch, Executive Director of the National Offshore Wind Research and Development Consortium. Photos by Alyssa Stone/Northeastern University

Vineyard Wind currently is in the process of building the nation’s first commercial-scale offshore wind project off the coast of Massachusetts.

The U.S. Department of Energy says 40,083 megawatts of energy from offshore wind farms are currently in various stages of development.

“I don’t think we can build too much or go too fast,” said Walter Musial, principal engineer and leader of the offshore wind research platform at the National Renewable Energy Laboratory.

Opting for larger turbines could slow down the process, Musial said. Instead he suggested driving down the cost of offshore wind turbines and locating them off coastal areas wherever appropriate in the United States.

“We can’t just be putting turbines in the Northeast,” Musial said. “The Northeast is the leader. (But) we have to go everywhere there’s windy oceans.”

Just as wind energy blew jobs to the country’s interior, Kennedy said the offshore wind industry ultimately will create tens of thousands of new jobs on the coasts.

A managing director at Citizens Energy, Kennedy said that part of the offshore wind industry challenge will be involving people living in low-income areas.

“The days when working class communities can be torn apart” to make room for transmission stations and corridors and highways “are long gone,” he said.

“While doing the right things for the planet we have to make sure we’re doing it the right way for humanity,” Kennedy said.

Jocelyn Brown-Saracino, offshore wind lead for the U.S. Department of Energy, said offshore wind will play a large role in meeting the net zero target by 2050.

A big part of the challenge will be to reduce costs, she said, adding it will require an all-hands on deck approach.

“We’ve made remarkable progress of late,” Brown-Saracino said. “I’m really looking forward to a year of growth and expansion.”

“The US is on the cusp of launching a new industry that will harness the vast resources of renewable wind energy off of our coasts,” Myers told News@Northeastern.

At Northeastern, “The Department of Civil and Environmental Engineering’s foundation of use-inspired research of civil infrastructure positions us to answer industry questions and convene meetings of industry leaders like these,” he said.