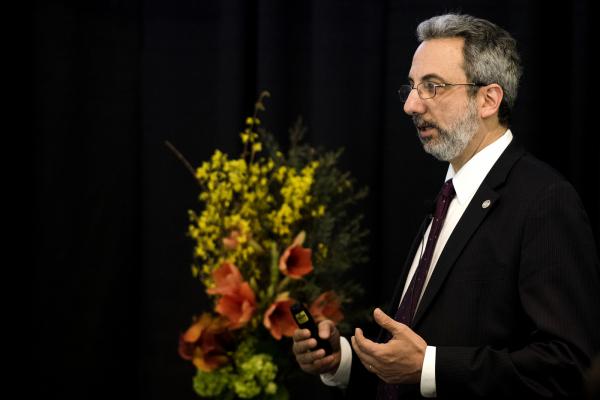 In the span of about 15 seconds, a 1994 earthquake in Northridge, California, became the costliest natural disaster in United States history to date. The exorbitant $20 billion in property damages was due in part to steel structures that fractured unexpectedly. Many of these buildings were nearly brand-new.

Jerome Hajjar, CDM Smith Professor and chair of the Department of Civil and Environmental Engineering at Northeastern, led a study at the time examining one such building to figure out why it failed. The structure was up to code and met all industry standards. But its design fundamentally lacked resilience, Hajjar said on Monday in the Raytheon Amphitheater as he delivered the 54th annual Robert D. Klein Lecture.

The award and lecture series, which were established in 1964, recognizes a faculty member who has contributed significantly to his or her field. Hajjar, who is an expert on steel structures, structure resiliency, and earthquake engineering, has published more than 200 papers on these topics. He also directs the STReSS Lab in Burlington at the Kostas Research Institute for Homeland Security, a facility that enables full-scale testing of buildings, bridges, and other structures.

Hajjar explained that buildings all over the world have succumbed to quakes because they were designed never to collapse at all. As a result, these structures are not resilient to unforeseen events. Hajjar wants to overhaul the field of construction engineering so that new buildings are designed with the concept of collapse in mind. His model for a truly resilient steel structure includes frames that can rock free of the building’s foundation, fuses that absorb energy, and connecting posts that snap the building back to vertical when it begins to sway.

While it may take years before the full design is incorporated into international building codes, Hajjar said features of it have already been adopted. For example, the University of Southern California School of Cinematic Arts building was designed with the energy-absorbing fuses that Hajjar tested.

In addition to crusading for increased building resilience, Hajjar is determined to make the whole field of construction engineering more sustainable. He said that when buildings get demolished, only about 6 percent of the steel is reused. “I’d like to see that number go up dramatically,” Hajjar said. He is championing an effort to redesign steel beams so they can be dismantled and removed without being damaged. That way, construction engineers can easily reuse the beams in another structure. “We’d like to create a whole new industry around this,” Hajjar said.

On a regional scale, Hajjar is working with a multi-university team of researchers on a report coming out this summer that documents the need for a national research infrastructure to develop offshore wind facilities.

“This is an industry that is about to explode, and we want to be the ones building this here,” Hajjar said, adding that there is enough wind capacity off the East Coast to power the entire country’s energy needs—and then some.

Hajjar acknowledged that the field of construction engineering has improved in recent years, but that more is needed to make urban regions sustainable and resilient to natural disasters.

“I think we have a moral imperative to integrate sustainability much more in engineering design,” Hajjar said. “These are the kinds of things that can change a culture.”