Broad Experience Made the Difference 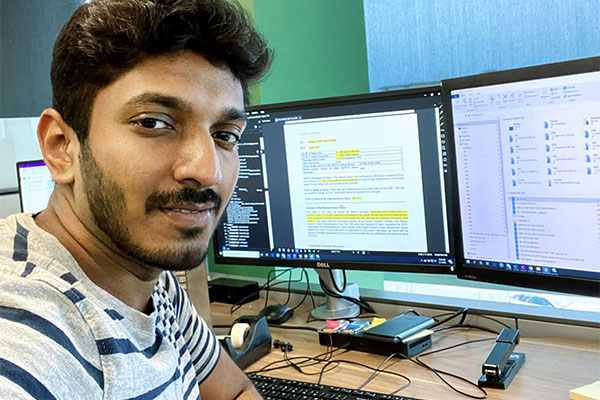 Aravind Uthaman, ME’19, civil engineering, was crawling on his hands and knees for more than 300 feet into a water conduit tunnel. It was certainly not a position he expected to be in when graduated in 2019 with a master’s degree in structural engineering.

But then again, Northeastern students pride themselves on being able to adapt to unusual assignments. The assignment, in this case, was to inspect the conduit for potential leaks and design flaws and while it was a little spooking, it was also an exciting change of pace.

“Working on tunnels was a new experience for me,” he says. “The first question they asked me before I went in was whether I’m claustrophobic. I’m not. It didn’t bother me a bit.”

Uthaman is an assistant project consultant at Simpson, Gumpertz & Heger, a Boston engineering firm that investigates structural flaws in buildings, bridges, and tunnels, then creates engineering solutions for the issues they discover. On a more typical day, Uthaman is at his desk, analyzing data to determine the structural integrity in a variety of structures.  Many of the projects stem from lawsuits filed to determine blame, and it’s his job to determine the exact nature and severity of the error.

“One of my projects involves a public transportation station in Canada; another involves a parking garage that isn’t sufficiently stable,” he says. “Each project is a different experience and I enjoy the variety.”

Uthaman credits his blossoming career as a structural engineer to Northeastern’s emphasis on experiential learning, which began on his first day of orientation.

“Jerome Hajjar [chair of the Department of Civil and Environmental Engineering] called me to his office and spent a half-hour discussing my career plans,” he recalls. “When I mentioned that I wanted experience in engineering research, he immediately gave me a choice of projects.”

Uthaman chose to work on the pioneering research that has brought Hajjar national attention in his field—improving human safety by using drones to inspect bridges. The drones capture high-resolution 3D images of the bridges that are then used to conduct inspections.

“My work with professor Hajjar helped me sharpen my software skills such as Revit, Tekla, AutoCAD, and STAAD,” says Uthaman. “These were important skills to have on my resume. I also had an opportunity to contribute to two published papers. Companies want this because it shows dedication to the field.”

Co-op was another key experience for Uthaman, who spent seven months at Lemessurier Consultants, a Boston structural engineering firm.

“I went there expecting to be assigned mostly routine tasks, but on the contrary, they gave me several actual projects to handle. In all, I had the opportunity to work on 24 projects.”

He designed the structure that hangs the scoreboard at Matthews Arena and did design work for several structures in Canada. One of his most useful experiences was when his firm required him to perform hand calculations for several of his projects, which gave him a greater understanding of the calculations rather than simply relying on existing spreadsheets.

Uthaman’s ultimate career goal is to launch his own engineering consulting company. But first, he has to earn his professional engineering license, which requires four years of work experience.

“When I was an undergraduate in India, was fascinated with the engineering of long bridges and high-rise buildings. I came to Northeastern because as an undergraduate in India, you don’t get any company experience. It’s all theoretical. At Northeastern, I was able to conduct research, work at a company for seven months, and contribute to several published papers. These things made my career path much straighter.”