Biking to a Better Tomorrow 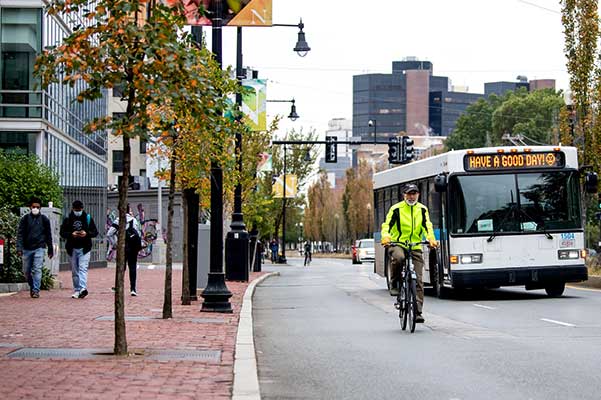 Where do bikes—and bike networks—fit in the infrastructure bill debate?

Lawmakers continue to quarrel over their support for the $1.2 trillion infrastructure bill, a gargantuan public works package that is chock-full of initiatives and investments shore up roadways, buildings, bridges, public transit, and the internet, among other things.

Amid the legislative confusion, transportation experts and climate advocates have separately expressed mixed feelings over the bill’s priorities, with many transit groups saying the package does not go far enough in addressing what was—until the COVID-19 changed the nature of work and, therefore, commuting—an urgent problem in most cities: reducing vehicle traffic and, in turn, building out bike networks.

“I don’t see anything in there that says we’re going to move America ahead on the sustainability front by investing in bikes,” says Peter Furth, professor of civil and environmental engineering at Northeastern. “It’s still largely a local matter” for communities to take up on their own.

And while the pandemic has lessened a widespread traffic congestion problem in many U.S. cities, efforts to reduce carbon emissions will still require driving less. Establishing safer, more bikeable streets is one cost effective way to inch closer toward this goal, Furth says. “Biking is a far superior mode of travel” than driving, Furth says. “We just need to make it safer.”

In fact, if Boston prioritized investments in bike transit—made roads safer, added protected bike lanes, and expanded bike facilities—the number of people who would bike as a means of travel could increase in the short-term by up to 15%, Furth says, citing past research.

“Boston is mostly flat, parking is expensive, and driving is hell,” he says, “and distances are small. There are a lot of good factors here to get a lot of people riding bikes.”

The problem, Furth says, is that fewer than 2% of Bostonians who bike to and from work had “low stress” routes available to them, according to a prior survey. The safety and ease of bike travel on streets is based on several factors, such as traffic volume, traffic speed, and whether there are protected bike lanes, among others, he says.

While the city has expressly envisioned a bike-friendly future, Boston is behind other U.S. cities in practice. Cities like Boulder, Colorado; Portland, Oregon; and Davis, California—considered one of the biking capitals of the U.S.—have made a concerted effort to swing the pendulum away from emissions-based transit toward biking and sustainability. Many places in Canada and Europe have long relied on bike networks as primary transit modes, outpacing even the top bike-friendly U.S. cities.

The benefits extend beyond mere travel.

“Not only are you addressing sustainability, but equity—everyone can afford one—quality of life, obesity, and public health,” Furth says.

Transforming a city like Boston into a “cycling nation” like the Netherlands—where more than a quarter of adults make some of their trips on bikes, and up to 50% of high schoolers ride bikes to school—would, at base, cost about $1 billion, Furth says. The money would be used to reconfigure streets to make them bike-friendly, bike lanes, and other facilities to ensure safety and continuity.

Given that parts of the public transit system are in a state of disrepair from years of underinvestment, combined with deep budgetary problems facing the MBTA in the coming years, an allocation of that size might be a hard sell, Furth says.

“It’s something you can get big returns on for every dollar you put in compared to other things,” Furth says.

A shift towards biking would inevitably carry with it questions of transit equity. There is a long history of bike reliance in communities of color in the U.S., but also a deep stigma that associates biking with “carlessness,” and poverty. There is also data showing that biking in Black neighborhoods was associated with over-policing.

In Boston, the BlueBikes bikeshare program, which has hundreds of stations across the city, offers discounted rates to students and low-income riders. But the focus on bikeshares, which may also be used for leisure, might distract from other equity concerns and approaches to bike expansion, says Joan Fitzgerald, professor of public policy and urban affairs at Northeastern.

It’s unlikely transformational change on bikes will come from the federal government, but rather through local advocacy, Fitzgerald says.

“There has to be a call from the neighborhoods that want biking,” Fitzgerald says. “Until we see that kind of movement, where there’s pressure in the city about equity and access, we won’t see change.”