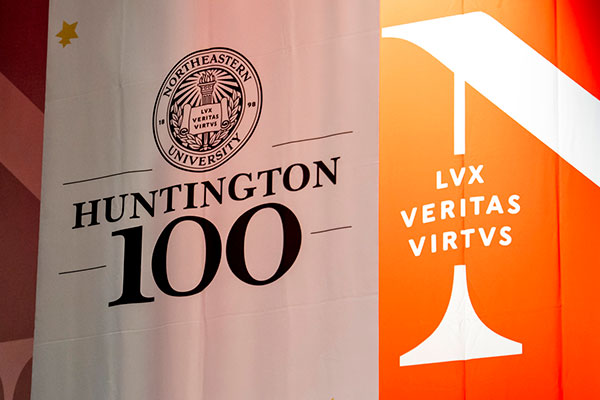 The 2021 members of Northeastern University’s “Huntington 100,” a group of students selected for their outstanding achievements locally and globally, included eighteen students from the College of Engineering. The Huntington 100 are nominated by faculty, staff, advisors, coaches, employers, and fellow students.

A computer science major described by a dean as an “intellectually curious scholar” and a Russian-born business major who worked on global marketing campaigns for big companies while on co-op were among this year’s undergraduate and graduate students inducted into Northeastern’s exclusive Huntington 100 club at an in-person ceremony Thursday.

Joseph E. Aoun, president of Northeastern, called the honorees a community of the university’s “most influential leaders” in areas such as academics, research, and athletics. “You are models for the rest of the students, not only now, but in the future,” he said.

More than 800 students—the most ever in the 15-year history of the Huntington 100—were nominated by fellow students, faculty, staff, advisors, coaches, and employers. The 2021 class included inductees from 2020, whose ceremony was canceled because of the pandemic.

The formal affair, traditionally held on the top floor of East Village, was switched to the larger Blackman Auditorium in Ell Hall to accommodate proper distancing.

Top left: Joseph E. Aoun, president of Northeastern, talked with some of the newest Huntington 100 inductees. Top right: Bessie King, who graduated in 2008 and was inducted into the Huntington 100 the same year, recounted her time at Northeastern. Bottom left: “You are models for the rest of the students,” Aoun said at the ceremony. Bottom right: A student signed the Huntington 100 guest book. Photos by Ruby Wallau/Northeastern University

Honorees’ name cards were placed on every other seat, along with a goodie bag filled with a bottle of water, granola, popcorn, a sugar cookie, and a pen to sign the Huntington 100 guest book. More than 100 seats in the nearly 1,000-seat auditorium were reserved in all, and everyone wore a mask throughout the ceremony.

A black backdrop decorated with gold stars was available for selfies as people filed into the lobby of Ell Hall.

Once the afternoon ceremony was underway, students crossed the stage as their names were called and picked up a red satin stole to be draped around their necks like scarves. Previous honorees wore gold stoles. Lily Harris, a senior in the five-year nursing program in the Bouvé College of Health Sciences and a 2019 Huntington 100 member, encouraged the audience to wear their stoles whenever they graduate, be it this year at Fenway Park or in the future.

Northeastern inducts the 2020 and 2021 classes of the Huntington 100 in Blackman Auditorium. Last year’s ceremony was canceled due to the pandemic. Photos by Ruby Wallau/Northeastern University

“Many of you have conducted groundbreaking research, led student organizations, started your own businesses, and contributed to our Division I athletic teams,” Harris said. “You have made a profound impact on our campus community and should be very proud of your achievements.”

Computer science major Daniel Rassaby was noted for “a commitment to interdisciplinary research, particularly at the intersection of computer science and philosophy,” according to a nomination submitted to a panel of judges by Karyn Rosen, an assistant dean in the Khoury College of Computer Sciences.

“Daniel exemplifies what it means to be an intellectually curious scholar with interdisciplinary impact while valuing global experiences and university and community service,” she wrote.

Diana Agori, a business student who was born in St. Petersburg, Russia, was nominated by her co-op advisor, Brooke Johnson. “I’ve always had so many equally valuable passions, from entrepreneurship and philosophy to art history, to filmmaking, and Northeastern made it possible for me to fit them all into a five-year university experience,” Agori said.

“Being hungry for learning more and exploring the world, I came to the U.S. with only optimism, motivation to find my voice and place, and my always-supporting mom,” she added.

Agori’s co-op on the global marketing team at the Boston Consulting Group involved an analysis of the company’s communications across various digital channels, including social media, as part of a major rebranding effort. She also worked with a large U.S. software company on a digital marketing strategy during the pandemic. Erica Belvit, a co-captain on the women’s track and field team, was chosen for the Huntington 100 for her athletic and civic accomplishments. She currently holds a pair of Northeastern records in the women’s hammer throw and the weight throw. The business student co-founded Northeastern University’s Black Athlete Caucus and is a senior analyst in the university’s chapter of Smart Woman Securities, a nonprofit organization.

“We’re celebrating the diversity of the Huntington 100,” Aoun said. “You are coming from different horizons, different ethnicities, different countries, different interests. We value that,” he told the audience. “That’s what makes the university vibrant.”