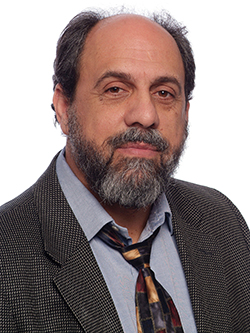 Department of Civil and Environmental Engineering Professor Dennis Bernal was awarded the 2020 Søren Buus Outstanding Research Award for the critical contributions and innovations he has made in his career to the fields of systems identification and earthquake engineering. The Søren Buus Award is given each year to a Northeastern College of Engineering faculty member for their accomplishments in advancing the frontier of knowledge.

Bernal was originally inspired to study earthquake engineering as a recent grad visiting his native Dominican Republic. He spoke with a member of the Ministry of Public Works who urged him to study the issue. The DR is located in a particularly seismically active region, and such expertise could help them better understand earthquake threats to the country. After completing his PhD and one year as a professor in Tennessee, Bernal was on the lookout for a little adventure. He moved to Mexico City in the early 80’s, at the time one of the prime locations of earthquake engineering research. “An important part of my work in that period focused on understanding collapse under strong ground motion,” said Bernal. His work in the Mexican capital led to the development of a paper, “Instability of Buildings Subjected to Earthquakes”, which appeared in the Structural Engineering Journal of the American Society of Civil Engineers (ASCE) in 1992 and won the Moisseiff Award from the society.

Bernal joined Northeastern in 1986 and in 1993 went on a sabbatical to Spain, where he began to formulate some of the ideas that would leave his greatest impact on the fields of earthquake and structural engineering. His research for much of that decade focused on the concept of Structural Health Monitoring (SHM). “The term refers to the use of instrumental data to assess the state of existing systems,” Bernal explained. “Is the building or bridge OK after an earthquake? Is the blade of a wind turbine suffering delamination? These two questions pertain to the existence of damage. The next level in the line of inquiry relates to location, where is the damage located?” One way engineers can answer these questions is by equipping structures with an array of sensors and analyzing the collected data.

As Bernal found, it is well understood how to examine small regions of a structure, but there existed a dearth of methodology for large systems with small sensor densities. In 2002, it occurred to Bernal that the problem could be flipped on its head: instead of trying to find where the damage is, what if you tried to find where the damage is not? It turned out to be a fruitful idea. His paper, “Load Vectors for Damage Localization” (DLV) established the DLV method, which has been the focus of a number of Ph.D. dissertations, experimental projects worldwide, and continues to attract attention from researchers.

In post-disaster review of a structure it is crucial to pinpoint the location of damage. Is this damage on the fifth level? The sixth? The tenth? “I sometimes got comments expressing concern that the DLV approach doesn’t tell you anything about the size of the damage, but this is actually a merit of the DLV approach! At first glance it may appear to be a deficiency but decoupling location from severity is key to success, as it reduces the number of unknowns that have to be considered at one time. The most difficult part of the damage characterization problem is the ‘where’.” There are certain structures where localization can prove critical, such as locations that are difficult to inspect closely in person, e.g., space structures, underwater structures, or even a high bridge with difficult access.

One important example of location of damage vs. severity of damage came during the famous Northridge Earthquake. Many buildings had failures of their welded connections, but they appeared to be fine, as many of the welded connections were covered by partitions, making them unnoticeable in an inspection. They were only discovered because some structures under construction had welded connections exposed, and the damage was visible. By utilizing the DLV method one could narrow the region where a building’s damage is located, guiding decisions on what to uncover and where to look.

Nowadays, Bernal has turned his interests towards tipping points, or the point at which a small change can lead to a runaway larger change of a system. The mathematics to identify when a system is approaching a tipping point- whether that system is a structural one, a biological one, an ecological one, or what have you, are well known; the difficulty lies in the formulation of reliable models. He is working on pushing the boundary of what can be learned from data. When will an area of land become a desert? When will a species enter extinction? When will climate change become irreversible? “If you are close to a tipping point, the system you are looking at starts to look sluggish,” he explained.  If you are not close to a tipping point, the system recovers from a shock faster than when you are close. The sluggishness is called a critical slowdown and has been widely studied”. But sometimes you don’t need to be close; a system can be shoved over to a new state by a large enough shock and much less is known about the likelihood of these “noise induced transitions”. Bernal hopes to study these phenomena to create data-driven models that can estimate the time a system may take before cresting the tipping point if the existing conditions linger. Regardless of what field his research focuses on, Bernal brings with him a novel approach to looking at problems.