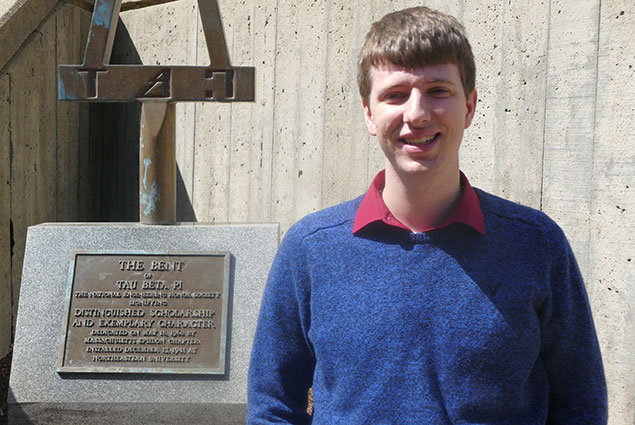 On a journey to better society as a consulting engineer, Michael Tormey, E’20, civil engineering and economics, recently received the prestigious 2018 Presidential Scholarship awarded by the American Council of Engineering Companies of Massachusetts Education Corporation. Tormey received a $7,500 scholarship in recognition of his “hard work, energy, and achievements in service to the engineering community and in support of furthering his engineering education.”

In addition to his academic and extra curricula achievements, Tormey included an essay in the scholarship application on consulting engineers’ contribution to society. “You hear it all the time that engineers solve problems,” Tormey said. “Rather than just solving problems, I see that consulting engineers will increasingly be called on to create things.”

He saw this firsthand at his first co-op, at the engineering firm VHB. The company took a defunct industrial area in Somerville, Mass., and turned it into a public space with shopping, dining, and entertainment; it’s now called Assembly Row.

“They could have just cleared the land and solved the problem of this disused industrial site, but rather, they created this beautiful community space that’s really nice and family friendly,” he said. “The amount of work that consulting engineers can put into building things like that for society is impressive.”

At VHB, he tried all aspect of the civil engineering process: grading, drainage, site layout, utility planning, traffic impacts. He did everything from concept planning, to edits, to submission review and submission. And from this he learned the area he is most interested in—concept planning.

“I just accepted an offer for my second co-op with the City of Boston,” he said. “I’ll be doing bus rapid transit concept planning with the Boston Planning and Development Agency. I see it as an opportunity to explore more of what I really like and start getting into city planning.”

Commenting on being awarded the ACEC scholarship, Tormey said, “I am humbled and excited to represent Massachusetts and Northeastern University at the award gala and as the state nominee for the National Scholarship competition.”

At the National Competition, Tormey also received a $5,000 scholarship from the ASCE, in addition to the award he received at the state level. He was one of three students nationally invited (and sponsored) to accept the award in person at the conference.